The Oakland Is Mural is in honor of "Poppy Day" and clearly in remembrance of the 1989 Loma Prieta Earthquake. It's located at 26th St and Mandela Parkway. Painted by Vogue TDK, Amend TDK, and Bam.

This mural is part of a mural project series by the TDK Collective (facebook) depicting the history and culture of Oakland as described in a lecture by Francisco Sanchez and Vogue TDK.

The bottom right corner of the mural now says (not pictured in this picture) "Emerging from the rubble & dust clouds of tragedy is the spirit of Oakland; bright, abundant and relentless." 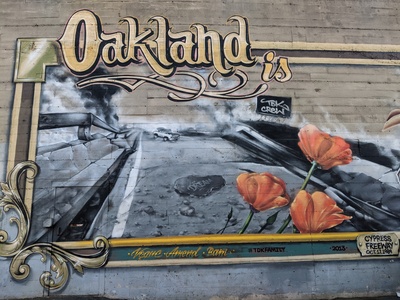