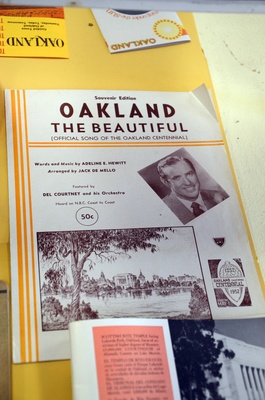 Oakland the Beautiful
photo CC-A by Our OaklandOakland the Beautiful was the "official song of the Oakland Centennial", celebrated in 1952. The words and music were written by Adeline E. Hewitt, it was arranged by Jack de Mello, and published by Ray Meany. According to the souvenir sheet music, it was "featured by Del Courtney and his Orchestra", and "Heard on N.B.C. Coast to Coast".

It was the 8th song published by Adeline Hewitt, who lived at 4012 Lyon Avenue. She had also written "Valleys and Mountains out West" which was used for the California Centennial Pageant in 1948. 1

Del Courtney played it on his show on KPIX, as well as in performances at the Claremont Hotel. 1

A copy of the sheet music was displayed at the Oakland History Room as part of the "100 Years of Oakland Boosterism" display in October 2013.