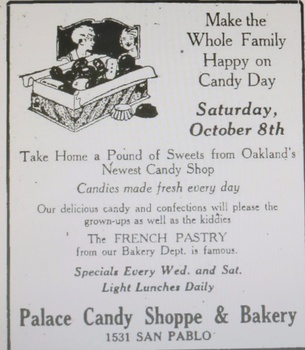 The Palace Candy Shoppe & Bakery was located at 1531 San Pablo Avenue, in Oakland, California.  French Pastries were served in the Bakery Department; candy and confections were available in their candy shop.

On Saturday, October 8, 1921, the Palace Candy Shoppe & Bakery was one of many Oakland based candy businesses that participated in the first National Candy Day celebrations.