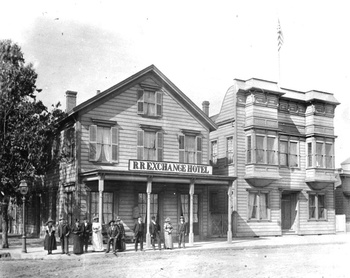 The Railroad Exchange Hotel, a working-class boardinghouse in West Oakland, was opened c. 1864 by German immigrant John Frese.2 It was one of the first hotels in the area, considered a "more prestigious third class establishment" due to the fact the hotel had a dedicated entrance, a lobby and ground floor office so that respectable women could stay in the hotel. The hotel's saloon had a separate entrance, whereas fourth class hotels of the time had only entry through the saloon; any women boarding at a hotel which had just a saloon entry was thought to be a prostitute. In a hotel such as the Railroad Exchange Hotel, women could maintain a level of working class respectability. The hotel was located on the corner of 7th Street and Bay Street, Oakland, California. 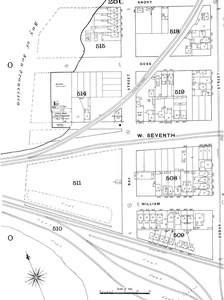 Situated on four large lots, Frese manged the hotel himself, which was uncommon for most hotel owners. He advertised in the Oakland City Directory that "This Pioneer Establishment is a First Mechanic's Hotel."

As shown in this excerpt from an 1889 Sanborn map, the hotel (shown as "RR Ho.") was less than one block from San Francisco Bay at the time.

At this point, it is not clear when the hotel was torn down. However, we have learned that a construction business known as the Noble Co. (later known as Noble Company) was located at or near the site as early as 1944, and the 1951 Sanborn map shows that the hotel's site was completely incorporated into Noble Co.'s property. The Noble Company's buildings were in turn demolished to allow the construction of the I-880 Cypress replacement.