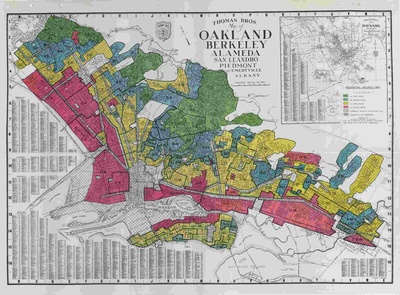 Redlining is the systematic practice of denying services to people in specific areas, generally along racial lines. This happened nationwide, but has had a large impact on Oakland over the years. The specific practice called "redlining" began with the National Housing Act of 1934, 1 but segregation and discrimination had of course existed long before that in Oakland. Racially restricted covenants such as the Lakeshore Homes Association's dating from 1917, explicitly barred selling or renting to Black or Asian people until such covenants became unenforceable through federal law.

In particular, people living in red areas of the map usually couldn't get home loans, and through restrictive covenants and direct discrimination, people of color often were not allowed to live anywhere else. Additionally, people of color paid more for lower quality homes in the redlined areas. This resulted in more white homeowners (even for comparable incomes), and "urban decay" in red areas. Business owners were also denied loans.