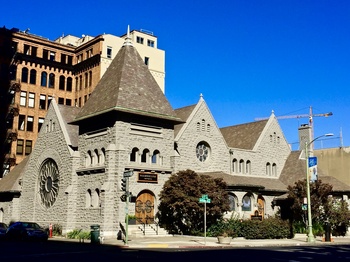 Resurrection Oakland in 2020 (photo by ICU2) 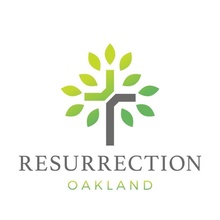 "Resurrection Oakland is a new church in Oakland seeking to love God, love one another, and love our City. We don’t have all the answers. Nor do we have it all together. Rather, we are broken, messy people who are learning the way of Jesus and how to live for a story bigger than ourselves." 1

By that time Resurrection Oakland had commenced a major six-month restoration project with Nzilani Glass of Oakland to conserve the sanctuary's large 12 panel, inverted stained-glass dome. The "Stained Glass Dome Conservation of Resurrection Oakland" was the winner of a 2020 Preservation Design Award for Craftsmanship/Preservation Technology.2 The dome is among the many stained glass windows original to the building's construction (1900-1901), designed by Charles David Grolle and crafted by the glass manufacturing studios of Flanagan & Biedenweg, Chicago, Illinois, with some windows containing images from the Christian Science tradition.1

"is one of Oakland's few truly characteristic examples of Romanesque Revival styling that was most popular in the 19th and very early 20th centuries and is probably Oakland's only example of lava stone as a primary surface material. The lava stone and the building's squat picturesque composition with expansive roof surfaces reflects the contemporary Craftsman Movement. The interior is distinguished by its vaulted ceiling and interesting spatial volumes." 1 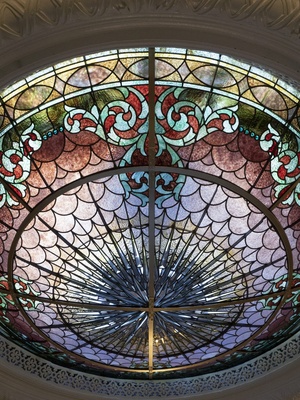 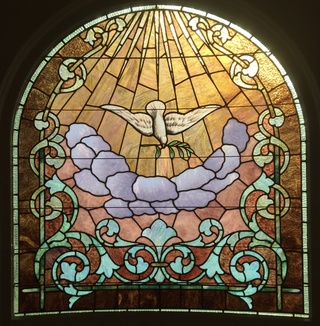 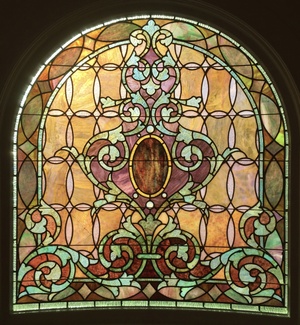