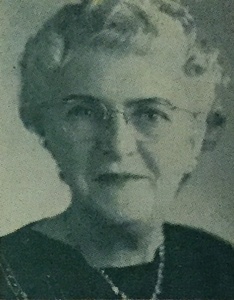 Sarah "Sallie" May Rutherford Thaler (May 19, 1888 – March 8, 1958) was a life-long Oakland resident, and active in the Native Daughters of the Golden West as well as other civic groups. A fountain in Lakeside Park was dedicated in her memory.

Sallie Rutherford was born May 19, 1888, near Mosswood Park, to John G. Rutherford and Sarah M. Kane (Rutheford). Sallie Rutherford married Charles Jacob Thaler (April 16, 1883 - 1956) on October 21, 1921. Thaler had been a boarder at the Rutherford home, and was a firefighter and later Battalion Chief of the Oakland Fire Department.

The Thalers lived at 310 Elwood Avenue. It appears they didn't have any children.

Native Daughters of the Golden West 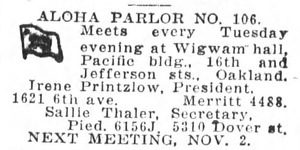 1926 listingThaler became a member of the Native Daughters of the Golden West (NDGW) in September, 1912, joining Aloha Parlor, No. 106. She became its president in 1919, and was serving a second term at the time of her death in 1958. She was elected a Grand Trustee of the Order in 1925, and was then elected Grand Secretary in 1927, a position she held the rest of her life.

As part of the NDGW, Thaler worked to preserve both Mission San Jose and Mission Soledad. 1

The Aloha Parlor met in the Pacific Building.

Charles died in 1956. Sallie died in 1958 at age 69, after falling down some stairs at home. The fountain was dedicated in her memory 3 years later. 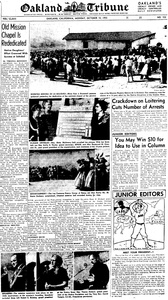