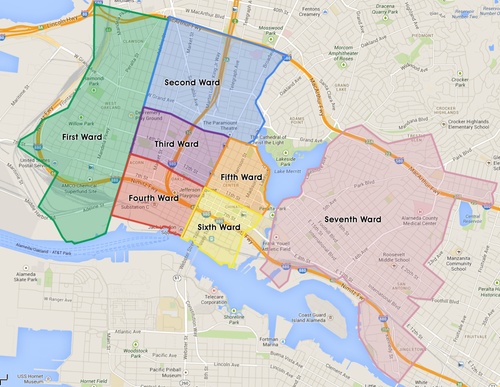 1887 wardsDuring the Legislative session of 1875 (or 1876?) the subdivision of the Oakland city wards were materially altered into seven wards, with new boundaries established by the passage of the law. In 1887 the Ward Boundaries for the City of Oakland were still divided into seven sections as follows:

Delger Street is now 20th Street. In the attached map, the boundaries of the wards follow the coast line as it was in 1887, and the Charter Line. The Charter Line follows some natural features like creeks that are no longer entirely above ground.

[ If there are different Ward Boundaries from before 1887 it would be interesting to include them in this entry for comparison. They were very likely different later. ]

The commission-form of city government replaced the ward system of council control in 1911.1

Oakland, 1852-1938 : some phases of the social, political and economic history of Oakland, California. Editors, Edgar J. Hinkel, William E. McCann ; published by the Oakland Public Library as a report of official project no. 465-03-3-337, conducted under the auspices of the Works Progress Administration, 1939, p.772.