Where Neighbors Meet is a mural in Dimond on Dimond Ave just below MacArthur Blvd. The mural features two sides of a postcard. The front of the postcard says "Oakland's Dimond District Where Neighbors meet." Each letter of the word Dimond includes a picture of an Oakland themed graphic. The back of the postcard says "Dear Bay Area, Have you heard about Oaktoberfest in the Dimond? Join us the first Saturday in October as we toast our vibrant community. Cheers! Your neighbors." The postcard is addressed to "Our friends in Oakland and Beyond, CA."

The mural is on the side of Club 2101 and says "Thanks to Club 2101/ the Duncan Brothers, and Carlos & Teresa Mendoza.

The stamp features a diamond and says "The Dimond is Forever."

In the upper left of the backside of the postcard, there is a little note that says "Dimond District, Oakland. In the early 1900s this area was a German enclave with several popular beer gardens. Oaktoberfest is a modern tribute to that history."

The mural was painted by Pam Consear of allhandsart.com with production help by Lara Tribe Jones. Panel Installation by H & X Builders and Peter Slapar. 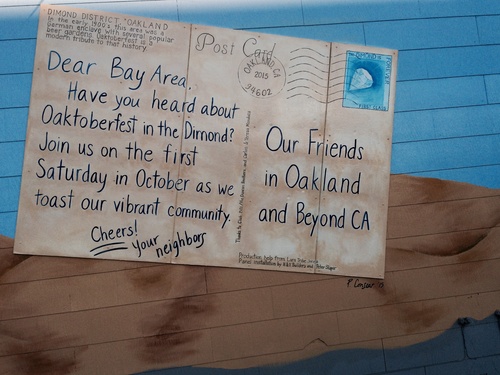 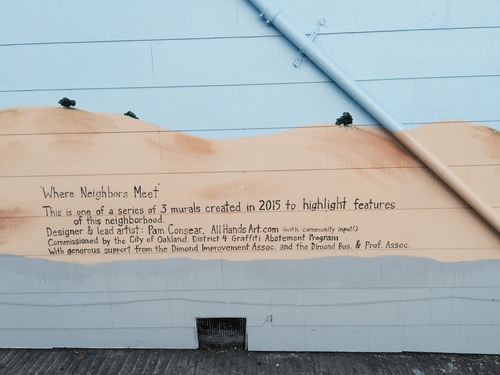 photo by greenkoziThis mural is one of a series of three murals created in 2015 to highlight features of the neighborhood. The mural was commissioned by the City of Oakland District 4 Graffiti Abatement Program with support from the Dimond Improvement Association and the Dimond Business and Professional Association.

The D has an image of  "Shop Oakland" (probably Farmer Joe's) and an ice cream cone (probably Flavor Brigade). The I, M and O show Oaktoberfest. The N has a picture of Kwikway. The D has coffee, which could be any of several coffee shops in the neighborhood. 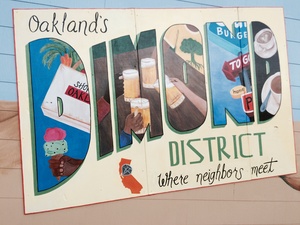