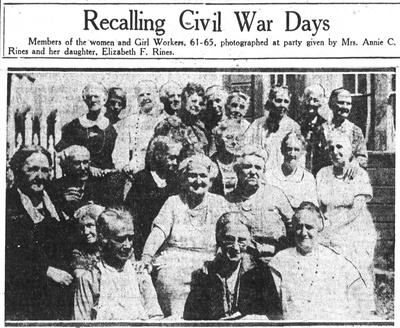 The Women and Girl Workers of the Civil War 61-65 (W. W. C. W.) was a group organized in 1918 to remember the contributions of women and girls in the Civil War. They are best remembered for donating the Abraham Lincoln bust that sits near the Alameda County Courthouse.

The group was founded by Sarah H. Wilson. 5 They met regularly at city hall. Some references suggest they were associated with the Grand Army of the Republic (G. A. R.), 1 though it may simply be that they were at a lot of the same events.

Annie Glud was a member. 2 Eliza Sheppard, sister of Jack London, and Ina Coolbrith were honorary members. 4 In 1918, Eliza Sheppard presented them with a banner. 3

c.1923-1925, Viola Murphy ran the organization, but Sarah Wilson was still active and still listed as "commander". The group was still meeting in 1945. The last mention I've found was in the obituary of Etta Wixson, apparently the last president. 8,9