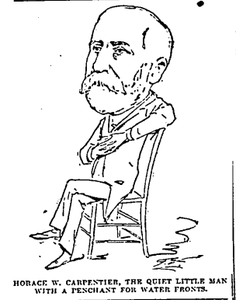 Horace Walpole Carpentier (1824-1918) was one of Oakland’s founding scoundrels (along with Edson Adams and Andrew Moon) and the town’s first mayor. (Details here, and of course here.)

The 2013 Oaklandwiki Executive Summary: clever, pathological NYC greedhead hustler was lured westward by – wait for it – gold. But panning for the shiny nuggets would’ve been hard work, so being a lawyer he sought “legal” ways to make Oakland his private cash cow. (This refers to his half-century-long stranglehold on the Port of Oakland.) Thereafter, he kicked back and counted his ducats, returning Eastward to lavish already-highly-endowed Eastern Universities with our money his ill-gotten gains.

On the plus side, he never married, and reportedly was kind to animals.

On the other hand.....There is no evidence that his reason to go West was to look for Gold.  Apparently he did go up to the Gold fields to take a look but that's about it. He lost his first attempt at an elected post in February 1850 when he ran for District of San Francisco State Senator, placing second to Elean Haydenfeldt, 771 votes to Horace's 526.  A mere 7 months after arriving in San Francisco.  He along with many others from the East, recognized the opportunities that the new state of California would offer.  He was simply better at it than most.

Horace came back to New York to live in 1882, 33 years after arriving in California.  He had a modest Brown Stone residence in Manhattan, and kept a very well appointed farm that he shared with his niece Maria Hall (later Williamson) in Galway NY, very near his birthplace in Providence NY.

Oh, no doubt he did! But to put this into context, one need only recall a certain Treehouse of Horror exchange:

An 1898-11-17 anecdote4 telling how Carpentier feigned piety to dupe the Peraltas also supports this notion. He was not one to underestimate for shameless rapaciousness.

Once Again...You can not believe all that you read about Horace.  Horace was vilified in the newspapers, particularly in the 1890's during the Southern Pacific/Water front battles.  There is no evidence that he ever passed himself off as a Priest, nor that he served as The Panama's Chaplain.  On every published passenger list of the steamship Panama, his name is with all the other passengers.  Furthermore, during the voyage (March 7, 1849), a bunch of passengers signed a petition on how they should act and avoid vulgarities.  Horace signed this as did scores of others, simply as Horace W Carpentier.

OK, OK … 9 million important topics on oaklandwiki, yet some of us just can’t get enough of this d-bag. Fine … here are a few highlights:

“… Arch Conspirator Carpentier pulled the strings and the little tin gods of Oakland—that is to say, the Mayor and City Councilmen—moved their arms and legs and made scratches with the pen as he willed.

If Carpentier wanted anything, he got it. If he wanted the town of Oakland incorporated, he had it done.

If he wanted a grant of the whole waterfront, he made his own terms for it. A little frame schoolhouse was not too small an equivalent for what is now ten million [dollars] of property.

If he wanted to fix things so that [his thefts] could [continue] undisturbed, he had an ordinance passed so fixing them.

If anybody tried to take the title of the waterfront or any part of it into court, he got the little tin gods to send out for the attorney on the opposite side and call him off and squelch the litigants.

… All of which action was conceived in fraud, born in fraud and carried out in fraud.”

No exaggeration  here.  In 1852, Horace was the chairman of The State Prison Commission.  There was quite a  controversy over where to build the first state prison.  San Quentin won out over Horace's objections, citing fraud, and excessive cost.  The following is a snippet of the story of building San Quentin from a Historical Essay by Carla Leshne

Horace W. Carpentier, the first mayor of Oakland, was the chair of the State Prison Commission, but had been unable to visit the San Quentin site with the other commissioners. Although he had favored a site in Martinez that was to be donated by the owner, he was overruled by then Governor Bigler, who ordered the prompt purchase of the land from Buckalew. Under James Graham, prison commissioner and also superintendent of public buildings, a design was drawn up for prison construction that would require an outlay of $570,000. Although Carpentier insisted that there had been a $100,000 spending limit voted on in the 1852 Act calling for the securing of convicts, somehow that part had been omitted in the published version of the law. Over Carpentier's protest, Graham proceeded to advertise for contractors bids.

The winning bid came from Ferdinand Vassault, with whom James Estell had close financial ties.. Vassault had bid more than $1,000,000 to complete the project. While this was the highest bid among the handful, the lower bidders had withdrawn their offers, most likely receiving compensation for their trouble by Estell and Vassault. After some debate, with Carpentier refusing to agree to the price, the bid was lowered to $725,000 and work was begun on the land.

In the 1853 legislative session, the contract was investigated once again and the Senate (Estell was a senator that year) heard testimony again about the language of the 1852 act. It seemed that most of the solons interviewed remembered that indeed the $100,000 spending limit had been passed, it didn't take much thought to deduce that bribery might have had a part in the written omission of the specification. As a consequence of the hearings, Vassault lost the contract. After the scandal, the legislature authorized funding for only one main cell building, and Estell's company, using bricks prepared by the convict laborers, completed the two story prison building known as "The Stones".

A little Newspaper clipping from 09/20/1855 when Horace went east for a few months. 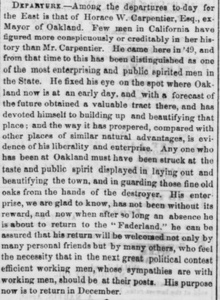 Interesting Fact...There were no less than 6 children of Horace's associates that were named  (either partially or wholly), after him.  Including a girl named Horace!