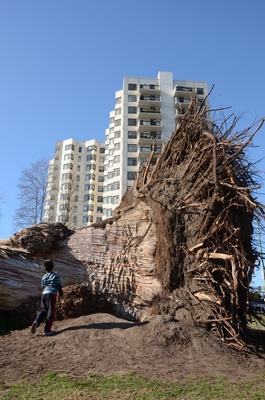 photo CC SA-BY Our OaklandThe Lake Chalet eucalyptus was a massive eucalyptus tree (Eucalyptus viminalis "Manna Gum") that was blown over during OakNado on November 21, 2013. The 120' tall tree was estimated to be between 137 and 150 years old.

The fallen tree became a tourist destination, with its own twitter account. There's a blog made up entirely of people taking pictures of it. The city even held a ceremony remembering the tree. 2

The tree managed to not damage any buildings or injure anyone when it fell. Given its size, it could have easily smashed into the nearby Lake Chalet restaurant at the Municipal Boathouse. The only damage it did were to a nearby magnolia tree 1 and a lamp post along one of the pathways.

It quickly became a play structure and target for graffiti. 1 Now the concern is that people will injure themselves climbing on the massive trunk and root ball that are still there (as of January 25, 2014).

As of April, 2014 large sections of the bole were cut but remaining. Eventually it was entirely removed and the hole filled so there is essentially no trace left. 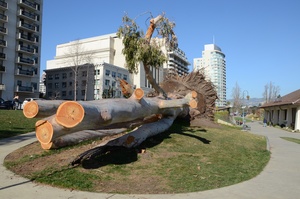 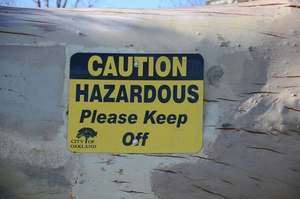 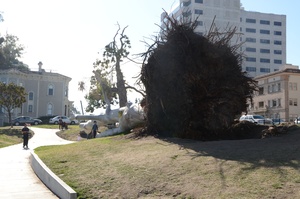