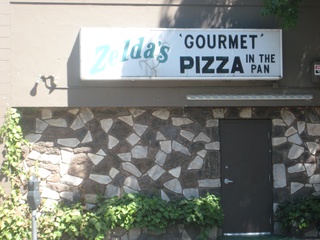 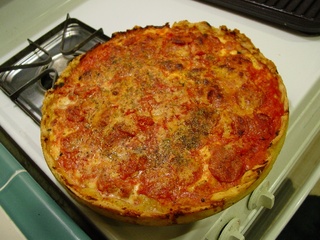 Zelda's is a Chicago style pizza restaurant located in midtown. The pizza has been rated highly in Sacramento News & Review Readers Polls for years, and is quite popular on weekends. It is considered a midtown institution, partially because the restaurant has not changed much over the years. It is unique in that it is one of the few eateries to still have booths, lack windows, and to be dimly lit, giving the impression that it is or was once a bar. Not so. It is a throw back to a different time, when many Sacramento eating establishments had a similar atmosphere. Nowadays, in a restaurant world where bright lights and flat screen TVs are the norm, Zelda's might seem like a "pizza dive", however "dive" might be a bit too strong of a word. "Vintage" would be more correct.

The wait staff has a reputation for being gruff, to put it mildly. It's part of the charm.

Call ahead of time and place your order. When the place is busy this will speed up the service as they can pre-make the pizza for you and it will be ready soon after you are seated. When waits at this place can regularly exceed an hour this is a godsend.

It's great pizza, but for Chicago Style, it is merely OK. The crust is a little gritty since it uses cornmeal to get the trademark yellow color. Because it is unique, many argue whether it is "good" or not, a debate that has more to do with taste than the quality of food. Zelda's has very few fence sitters. You either love it or hate it.

Some info originally from davis.

2005-06-09 14:34:26   I was taken here on a date. A pizza place, in Sacramento, for a date? Well, let me just say it was worth it. You really can't get this kind of pizza in Davis. I've never had this sort of pizza before, so consider me uneducated, but I liked how it was, well, sort of inside out! —Users/PhilipNeustrom

2005-07-11 19:56:44   I guess I like California pizza too much. I found Zelda's to be so horrible I only ate half a slice and left the rest of the "soup" in its "pan". If you need a spoon to slop a "slice" on your plate, you're not eating pizza IMO. So I didn't like it, nor did several others in my company. In the interest of full disclosure, I've never liked east coast pizza very much. And it's not like I had west coast pale imitations, I went to New York last year and ate at Lombardi's. —Users/JesseSingh

2006-09-09 13:17:58   Chicago style pizza is not East Coast (New York) pizza. For one reason, Chiacgo is not on the east coast. Chicago and New York style pizzas are as close to polar opposites as pizza gets. —Users/JustinLanska

2006-09-09 21:06:39   Let me tell you: having grown up in Sacramento and eating Zelda's at least once a month, the pizza is a million times better if you get it to go and eat it at home. It is even better cold for breakfast the next morning. I jump for joy on mornings there is Zelda's in the fridge. —Users/ElisaHough

2006-11-08 23:23:13   Having been raised on Zachary's, I've long wanted to sample Zelda's and compare. I can now say that Zelda's will do in a pinch, so long as I need a fix and know that I won't be visiting the Bay Area in the next month. The pizza had a good, tangy sauce and there were plenty of toppings. The crust was crisp and smelled buttery when taken from the oven (ordered half-baked); unfortunately, it had the consistency and bland flavor of a thick pie crust with too much shortening. This came close to countering, instead of complementing, the toppings and seasonings. As a side note, Zelda's menu does not offer a stuffed version. . . hence the willingness to hold off a few weeks for Zachary's. —Users/KevinChin

2007-06-22 20:16:09   I have been to Zelda's a few times since the end of the millennium. It's always been good. I went earlier this week for lunch, and it was the best pizza I had ever had there. Perhaps it was because it was less busy, but perhaps it's because they improved the 'pie crust' recently. The non-pizza items are decent. It's also dark and vaguely seedy. —MisterProfessor

2007-06-25 17:44:03   I grew up in Chicago - I've had Uno's, I've had Duo's pizza. I've had Zachary's pizza out here and I've had Zeldas. Neither Zachary's or Zelda's are as good as the pizzas in Chicago. But, Zelda's does offer a good pizza. Arguably the best Chicago style pizza in town. The wait staff seriously need to chill though, they're a bit too angry for my tastes. —BretB

2008-03-16 10:03:56   The decor is dark, drab—despite seasonal accoutrements—and dingy. The service is slow and inattentive. (On their Web site they say, "We are friendly at Zeldas [sic—no apostrophe], we are often too busy to smile. Show us respect, and we just might surprise you!" What does that mean?) The vegetarian pizza was at best a C—dry, fairly tasteless, as pizza goes, and simply boring. The salad was a large-ish bowl of iceberg lettuce with two unripe tomato wedges and two little breadstick crackers. Despite ordering ahead by phone, as the Web site suggests, it took 15 minutes to get a table and another 15 minutes to get the pizza—and then, when we had eaten half of it, the waitress asked if we'd like it boxed up. I guess that's the famous Zelda's bum's rush.

So what exactly is the charm of this place? —DavidRobinson

2008-03-29 14:28:19   This place is good if you like Chicago style pizza. I couldn't much of the pizza we ordered because I wasn't crazy about dough-y, sloppy, gunk that is Chicago style. Warning: Those of us who enjoy and prefer New York style aren't into Chicago (as a general rule). —CurlyGirl26

2008-05-23 22:26:07   Hate it. Just thinking back to the last time I ate a spinocooli (or whatever) at Zelda's, remembering how the crust tasted like air-hardened vegetable shortening and cardboard fiber, oh gag retch. Worst pizza ever. Even the toppings can't change a horrible foundation. —faithmuhl

2009-01-13 17:01:47   I ate here a while ago with my girlfriend. I liked the atmosphere and didn't mind the waitress's curt responses at all. In fact, I found them amusing. The food was tasty as well. However, my girlfriend and I both got sick that night. So, I'm hoping it was just a one-off thing as I really like what this place has going on. I'll have to give it another shot. —GabeDavis