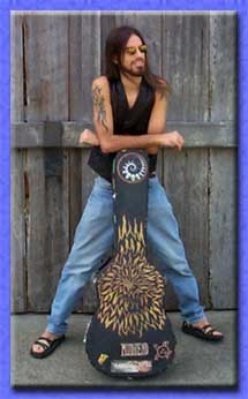 In the early-nineties, Nomad played guitar, sang, and wrote most of the material for the grunge-rock band, Mudhead, in Indiana (back when he was better known as Dave Miller). He then abruptly took up the nomadic lifestyle in the mid-nineties and found his love for the road while performing solo in various college towns along the way.

Nomad currently performs his original music as a solo artist and also with his band, Drifting Compass.

Addicted to the road and the pleasures that it brings, there is little question as to where Nomad found his inspiration for the great songs that appear on his CD, Trails To Hear And Now. The songs are filled with thought-provoking lyrics that question the norm and with great melodies that linger in one's head.

Primarily a guitarist and singer-songwriter, Nomad has come forth to display a broad array of talent on Trails To Hear And Now where all the instruments are played by him, creating a tight full band sound that rocks. Whether it's the sweet mandolin fills, tight bass grooves, vocal harmonies, or the great acoustic rhythms, Nomad shows us his multi-talented abilities to rock our world. Trails To Hear And Now showcases Nomad's great songwriting abilities with songs that inspire, enlighten, and get your booty groovin'!