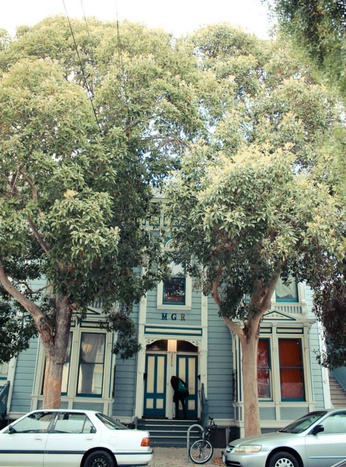 2976 23rd Street aka the Merry Go Round House is a 14-unit building in the Mission.  The house became particularly notable when, on June 12th, 2014, it was announced that the residents had coordinated a sale of the house to the San Francisco Community Land Trust.  The Land Trust will own the home, and the residents will form a housing cooperative to operate and control the building.

The building was on the housing market at the time, with a sales price listed of $1,780,000, when the residents worked with the Land Trust to purchase it from the owner.  The Land Trust was able to pool together city and federally available home loans for affordable housing into a financial package.  The residents involved the previous landlord very early in the process - because of the tight involvement between all the stakeholders, a financial package was able to be reached in which the previous owner left short term equity in the house to be paid off over 5 years.  This equity allowed a completely seamless transfer to the residents to happen without significant up-front fundraising. Given the housing climate at the time of the sale, this was a major accomplishment -- residents would have almost certainly otherwise faced eviction.  The owner had already received offers to reclassify the building under the Ellis Act, but was able to work with the Land Trust instead.

The announcement was made on June 12th, 2014, with residents and Supervisor David Campos.

According to this Beyond Chron article, the Land Trust obtained a carry-back loan from the building owner, as well as financing from Boston Private Bank & Trust.  The Land Trust will use the city's  Small Site Acquisition Program this year to repay the owner's loan.

The building often has cheerful live music floating from it in the evenings, with a variety of brass instruments and more. Sometimes there is a person practicing accordion.

The rather large house started out as two separate Victorian style houses that were bought and reworked into a youth hostel in the 80s.  The hostel, known as the International Guest House, had a 3 month minimum stay requirement.  The travelers were abundant and storied, and art and photography from this period still currently line the walls of the house.  The hostel was sold in 2007 to an owner determined to rent out to artists.  In 2014, the 15 residents of the house launched the co-op in the middle of several blocks filled with displacement and eviction.