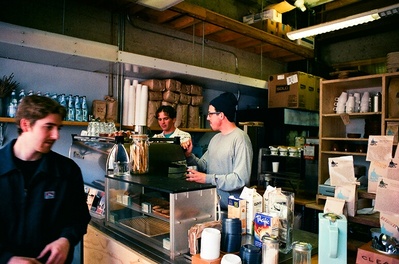 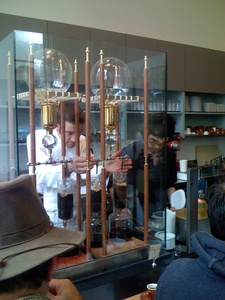 Blue Bottle Coffee Company is a coffee roaster and retailer founded and headquartered in Oakland, California.  The company has since expanded to other area including San Francisco, Palo Alto, Los Angeles, Brooklyn and Japan. They roast their own beans and donate beans that have been roasted more than 48 hours prior to charity. They make each cup of coffee by hand, which means it's never stale and really tasty. 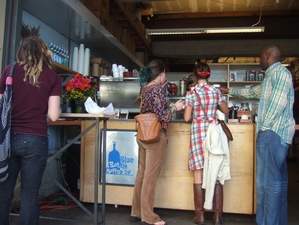 Their original location is in the side of an architecture shop and has no seating, save for the small wooden bench outside. The establishment is about 10 by 10 feet, in total, and is more of a kiosk than a full store. For owner James Freeman, Blue Bottle is "all about the coffee" and not "wifi or comfy couches."

They're named after "The Blue Bottle," the first coffeehouse in Vienna, founded in 1683 AD by Franz Kolshitsky. The kiosk location in Hayes Valley opened in 2005, and their roasting shop opened in 2002. They do their roasting in Oakland (1552 Beach Street #R). Coffee beans are available for purchase here, as well.

Blue Bottle has a booth at the Ferry Plaza Farmers Market in the city and the farmers market in Berkeley.

Cafe Cento sells coffee made with Blue Bottle beans. The Blue Bottle logo is prominently displayed — and larger than their business logo — making many assume they are a Blue Bottle location (photo Niall Kennedy cc-by-nc)

Blue Bottle sells their beans to a bunch of places, most of which actively advertise the fact they use Blue Bottle beans. Because of this advertising, sometimes these businesses are assumed to "be" Blue Bottle locations.

You can get coffee made with Blue Bottle beans at: 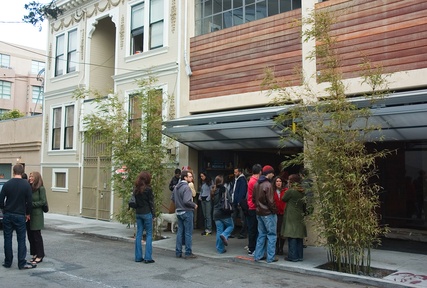