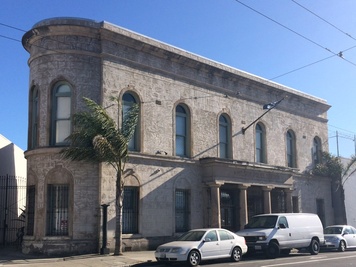 This one is at 3057 17th Street. It might surprise you as you pass by — it looks stuck in time, a lovely old station with a bit of decay and seemingly no occupants. It's a sudden reminder that the Mission wasn't always the current Mission, especially since this building is very small compared to the current station on Valencia.

In 1897, the Chief of Police argued for building new police stations for San Francisco. His opinion on the existing 17th Street Station was scorching: "this station is without proper accommodations, badly lighted, in a wretched condition, so far as draining and plumbing are concerned, a condition of things which is the natural outcome of the use of an old, small and dilapidated building." He goes on to ask for proper funding to build a "substantial" and "fire-proof" station nearby, noting the everpresent risk of riotous mobs. 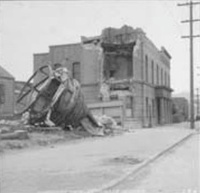 The fallen turret after the 1906 earthquake. (From a 1994 survey of the building as a historical resource.)

This seems to have worked! A few years later, the Mission got a new police station in the Romanesque Revival style of the time. A historical resources survey says "Built in 1899, the two-story concrete police station was designed by the firm of Shea & Shea. Damaged in 1906, the police station was repaired – minus its original corner turret – and placed back into service. It remained in service as the Southern District station until 1950 when the SFPD moved to a new district headquarters at 1240 Valencia Street." (It later moved to its current location at 630 Valencia Street.) 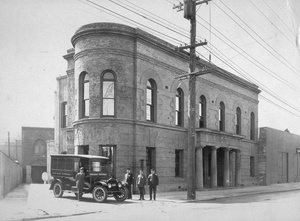 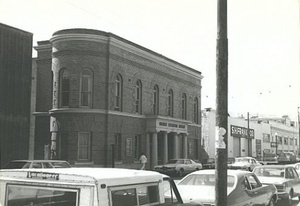 A photo from 1976, part of a survey of whether the building had historic significance. It lists the occupant as the "Business Extension Bureau".

Google doesn't bring up much about the station between decommissioning in 1950 and some hints in the 1970s.

Directories between 1975 and 1991 say this was the address of Western Real Estate News. This publication still exists, now in South San Francisco, with "comprehensive coverage of the latest commercial-industrial real estate developments in the West".

The building was renovated sometime in 1992;  a police officer newsletter mentioned it was "worth a drive by to see what it looked like in its prime".

That may have been when the exterior was updated - if you compare the 1924 and 1976 photos to the 2014 photo above, the styling around the windows is a little different now.

From 1996 at least until 1998, the building was the office of Silicon Reef, a "Web communications development company", apparently one of the first prominent tech companies in the area. An April 1998 article in SF Gate said "more and more companies are relying on a "cultural pacemaker" and setting up shop in the heart of the Mission" with Silicon Reef as its main example of a "heavy hitting digital squatter". (According to its former CEO, the company was "one of the first fully integrated Web technology services companies serving the Fortune 500 and rated top-10 world wide from 1995-1998".)

The SF Gate article goes on to say "Critics might suggest that...the eclectic tastes of the multimedia industry is what's responsible for pricing housing in the neighborhood far beyond the means of the families who have lived here for generations...But what if you found out that the company is actively involved in the community it has chosen to make a home in?", with a list of local organizations the company was helping.

Mayor Willie Brown proclaimed Dec. 10, 1996 as Silicon Reef Day to promote making "San Francisco the technology leader into the 21st century", with a luncheon for San Francisco and Silicon Valley executives. Silicon Reef's press release said "Silicon Reef has been chosen as a model company for its relentless dedication to community activism", but meaning a series of internet industry events instead of those local organizations. They hosted FreeBSD meetups at the office, like the current generation of tech company offices hosting various meetups. 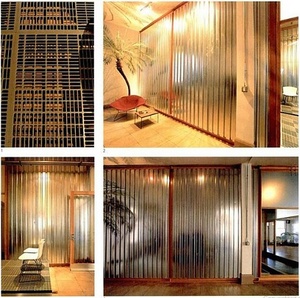 From 1997, a description of the building's interior: "Visitors, who are buzzed through the heavy iron gates and the front door, find themselves in a vast parlor with hardwood floors and a single overstuffed couch. Chandeliers hang from the 18-foot ceilings. The meeting room is a small, disarming area decorated with floor-to-ceiling trompe 'oeil paintings and a pair of flying cherubs on the ceiling...Next to the kitchen, and set off from the rest of the space by a set of iron gates originally located in an old Parisian apartment building, is a large atrium space that still contains the police station's small solitary confinement cells." A 1997 architecture book has a few photos of renovated interior space, all shiny aluminum and glass.

In a 1998 article about "multimedia" companies as the city's fastest-growing industry ("Web sites, Internet content, and computer and video games"), Silicon Reef gets a quote: "We call our area Digitropolis...We feel San Francisco is the creative capital for multimedia and the Internet." 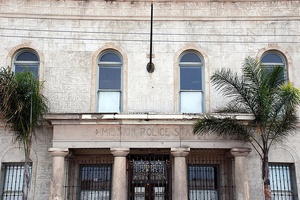 A company called "Liberty Trust Gelfand Rennert" bought the building in 2002 for $2.2 million. This seems to be Gelfand, Rennert & Feldman, "a leading full-service business management firm for entertainers, executives and select high net worth individuals". So, probably somebody like that owns the building now.

There was a reroofing permit issued in 2008 - in other words, somebody is maintaining the building.

There are rumors that Tracy Chapman lives there, but the building is zoned for industrial use ("production, distribution and repair") instead of residential use, so it's unlikely that anyone lives there. Chapman has gone to planning meetings about the building and did a photo shoot there, so it does sound like she's at least a fan of the building. There's another rumor that she owns it and uses it as a recording studio.

And an alternate history of the future

In the future seen from 1968 in Do Androids Dream of Electric Sheep? by Philip K. Dick, androids have set up a fake Hall of Justice on Mission Street. The movie adaptation, Blade Runner, was filmed in Los Angeles and features a police station (played by Union Station) instead of a couple Halls of Justice. If a movie had been filmed in San Francisco instead of Los Angeles, the old Mission Police Station would have been an appropriately creepy and grand filming location.