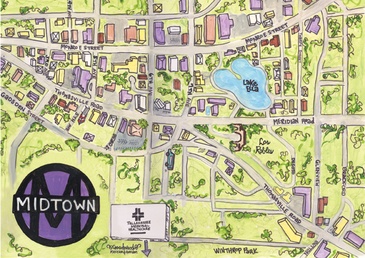 Midtown is the area on the north side of downtown Tallahassee running along Thomasville Road and Monroe Street roughly between Third Avenue on the south boundary and Bradford/Betton Road on the north side. In 2016, Midtown elected Etienne Mazimpaka as its first mayor. It is a popular local gathering place day to evening, incorporating a walkable restaurant, shopping and nightlife central corridor.  Popular and historic downtown neighborhoods such as Lafayette Park, Levy Park, Los Robles, Betton Hills and Forest Glen and Tallahassee's first shopping center Capital Plaza border the Midtown area. You can find the Midtown Merchants Association online at http://iheartmidtown.com.

See the presentation below by NAI TALCOR President Ed Murray about what's new in Midtown (May 2012, Fast Forward Tallahassee), for information on Midtown and projects like the Whole Foods market which will be build on the site of Miracle Plaza.

(to add rows or columns below, simply right click while editing)