A Bear Fight is an alcoholic beverage that was founded in Toledo, Ohio in June of 2010 at Mickey Finn's Pub. However, many have argued that Brazil was the founding nation back in 1995.

Snellville, GA native Jessie Marston developed the drink while jesting with Toledoans that they did not know how to properly consume alcohol. She insisted that this cocktail was a staple in Georgia; challenging all those present to drink a Bear Fight to prove their alcoholic prowess. After she convinced all of her pals to consume the beverage, it was revealed that Jessie had in fact fabricated the existence of the shot and thus... the Bear Fight was born.

The drink consists of an Irish car bomb (Bailey's liqueur and Jameson dropped into a half pint of stout) followed by a Jägerbomb. The drink originated at Mickey Finn's Pub but continued its legacy at The Attic on Adams where Amelia Jarret (bartender and liquor extraordinaire) has mastered the delicate nuances of this delicious Toledo tradition. 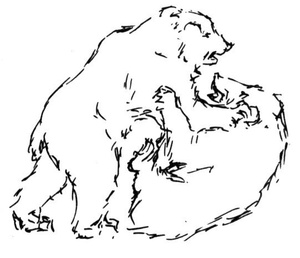