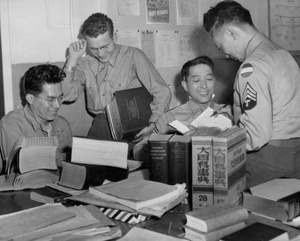 Translators at the Military Intelligence Service Language School at Fort Snelling, 1945.In 1942, the Military Intelligence Service Language School (MISLS) was established in Minnesota. The school trained soldiers as Japanese linguists to support the U.S. military in World War II. The MISLS became a point of pride for Japanese Americans who faced discrimination during the war. A unique institution, the school had a strong impact on the outcome of World War II.