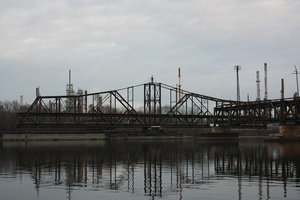 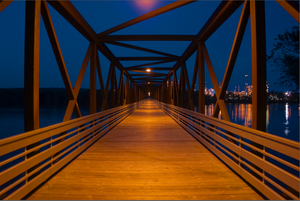 The remains of the Rock Island Swing Bridge, now used as a recreational pierThe Rock Island Swing Bridge was a swing bridge, built in 1895, that spanned the Mississippi River between Inver Grove Heights and St. Paul Park. It was also known as the Newport Rail Bridge, as it had a spur to Newport, and J.A.R. bridge. It was one of the few double-decker bridges on the Mississippi, with the top level formerly used for railroad traffic and the bottom level formerly used as a road crossing. The bridge was closed to rail traffic in 1980, and road traffic in 1999. After closing, the bridge sat dormant in the open position for 10 years before being partially demolished in 2009. It was converted into a recreational pier which opened to the public on June 11, 2011.