Alamance County has a very prominent and eclectic music scene, much of which comes out of the city of Burlington and Elon University. There are many local bars, venues, and bands that continuously bring the music to the cultural center of the county. 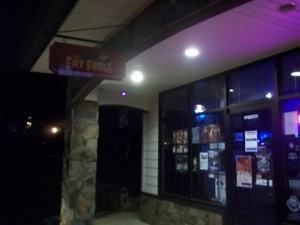 The sign and facade of the Fat Frogg. (Credit: Jacob Lenz)Located in Elon, the Fat Frogg is a bar with a music series featuring local bands and artists. Bands perform inside the bar on a stage located in the corner. An extremely intimate space, the Fat Frogg provides an up close and personal experience with bands such as Big Something and Back Porch Orchestra. It's a bar and restaurant with a family feel. [1]

Located in the City of Burlington,The Front Street Public House is a newer bar that features live music on Thursday, Friday, and/or Saturday nights of each week. With a maximum capacity of about 50 people, the Public House is known for being particularly loud and raucous. They feature a variety of different acts, from an R&B band called Soul Network to an Indie act named Wilhelm McKay. A handful of the concerts have an age requirement of 18+ or 21+. They also have an open jam on Tuesdays.[2]

Opened in December 2010 and located in Saxapahaw, The Eddy Pub is another new and fresh space featuring live music on the weekends. It features  different types of music from the other spaces, featuring mostly blues, instrumentals, and bluegrass artists. They also feature a weekly open mic night.[3]

The Haw River Ballroom, located in Saxapahaw near The Eddy Pub, is one of the most popular music venues in the area. It has a capacity of 700 and regularly features well known and popular bands and artists. It has been called "the most elegant and interesting nonmunicipal performance space in the state" and a "brilliant work of art" by Grayson of The Indy.​ Outside of the venue, a new amphitheater has recently been added next to the river, adding a new and refreshing outdoor performing space.[3] 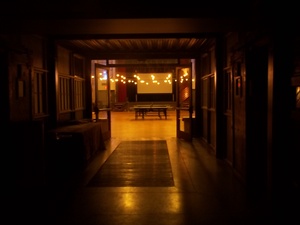 View from the front entrance of the ballroom. (Credit: Jacob Lenz)

There are many local bands that regularly play in the bars and pubs in Elon. They can range anywhere from a standard rock band to a big band to relaxed blues set. Big Something is a popular six-piece alternative rock band specializing in funk that regularly plays sets at the Fat Frogg in Elon.[4] Other common acts there are Hip Pocket, a band that's been compared to Band of Oz and Bill Deal & the Rondells, and Back Porch Orchestra, a four piece act with a diverse bluegrass feel.[5]The NC Revelers Orchestra are a big band that play Haw River Ballroom frequently. Their concerts often involve dancing.

Elon University, being a college, often hosts major acts in concerts. At the forefront of this is their yearly Homecoming Concert, which in past years has featured Corey Smith and Sam Adams, and in 2012 features Chris Webby and We The Kings.[6] Other concerts at Elon sponsored by the Student Union Board have featured national acts such as Third Eye Blind, O.A.R., Neon Trees, Jack's Mannequin, and Girl Talk. All concerts at Elon are free to students with the exception of the yearly Spring Concert.[7]

Elon University has four a cappella groups, two mixed, one all female, and one all male, that perform regularly during on and off campus events. In addition to these small weekly performances, they each have their own concerts either at the end of the year only or at the end of each semester in either Yeager Recital Hall or Whitley Auditorium. Auditions for these groups are held during the second weekend of September and include two rounds, first and callbacks. For the first round, each auditionee must prepare a verse and chorus of a song and perform it for the board, comprised of three or four leading members in the group, the president, music director, business manager, and treasurer. For callbacks, held on the next day, auditionees must prepare a verse and chorus of a contrasting song and learn a song with the group.[8]

The university's oldest a cappella group is a coed group called Twisted Measure. Formed in 1999, the group is composed of 15-19 men and women from different age groups within Elon. They hold two main concerts every year, in the fall and spring, and are known for singing barefoot at every gig, a tradition starting with the formation of the group. Since their inception, TM has recorded five albums: Barefoot & Beautiful, Lawful Piracy, Psycho Acoustic, Sole'd Out, and ...And The Rest Is Twistory; and been included on Voices Only in 2006 and 2012, and BOCA in 2006. The group also has a fall break tour, where in recent years they have sung in Washington, D.C., Nashville, and Atlanta.[8][9][10]

Elon's next oldest group, formed in 2001, is an all-female group called the Sweet Signatures. They are typically comprised of around 16 women, holding a fall and spring concert towards the end of each semester. In their 12 year history, the Sweet Sigs have appeared on many a cappella compilation albums, including BOCA in 2008 and 2011, Voices Only in 2011, and Sing in 2007. In addition, they have recorded four albums: Time After Time (2001), Pitch Black (2004), Coming Into Focus (2007), and Love Affair (2010). They placed 3rd overall in the SoJam Competition in 2009 and ICCAs in 2008; and are the hosts of Elon's Accappallooza, a gathering of a cappella groups from Elon and all around the Southeast.[11][12]

Rip_Chord, formed in 2006, is Elon University's only male a cappella group. They typically have around 12-15 men and are known for their infectious energy in performances. The group has released three albums in their first seven years, most recently Baby Back Rips, which was released in May of 2012. That same year, their rendition of It Girl by Jason Derulo was featured on Voices Only. On Valentines Day, they are known to sell a cappella grams, where a person can pay to have their significant other serenaded by the group. Their version of Some Nights by Fun. currently has over 87,000 views on YouTube.[14][15]

Elon's most recent a cappella group, Vital Signs, was officially founded in March of 2011. It are a coed group with around 16 or 17 members. With having just recently formed, they are yet to release any albums but they perform on and off campus frequently and have their own concert during the spring.[16]