Conan Smith is Washtenaw County Commissioner for District 9 in Ann Arbor, an elected position. He is also executive director of the Michigan Suburbs Alliance, a nonprofit based in Ferndale. 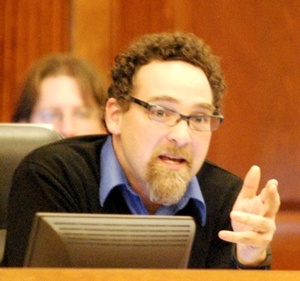 Conan Smith at a March 2014 meeting of the Washtenaw County board of commissioners. (Photo courtesy of The Ann Arbor Chronicle.)Smith, a Democrat, was first elected to the Washtenaw County board of commissioners in November 2004 for a two-year term representing District 10 – one of four Ann Arbor districts on the 11-member board at that time. He has won re-election every two years since then.

Due to redistricting that took effect during the 2012 election cycle, the county board shrank from 11 districts to 9. Ann Arbor was previously represented by four commissioners, but starting in January 2013 the city had three main districts – 7, 8 and 9 – in the newly constituted board. District 9 covers the west side of the city.

Smith served as county board chair in 2011 and 2012, and was chair of the board's ways & means committee in 2009 and 2010. He also has served on a variety of boards and other bodies in his capacity as county commissioner, including Ann Arbor SPARK, the Washtenaw Parks and Recreation Commission, the Voluntary Employee Benefits Association (VEBA) board, and the Sustainable Revenue for Supportive Housing Task Force.

Smith was founding board president of Michigan Saves, a statewide nonprofit established by the Michigan Public Service Commission to finance energy efficiency projects. He is board treasurer of the Southeast Michigan Regional Energy Office, a nonprofit collaboration of more than 20 local governments supporting renewable energy and energy efficiency policy and projects; and has served on the executive committee of Climate Communities, a national coalition of cities and counties that is educating federal policymakers about the essential role of local governments in curbing greenhouse gas emissions.

Prior to joining the Michigan Suburbs Alliance, Smith worked for six years with the Michigan Environmental Council as a program director.

Smith earned his bachelors degree in creative writing and literature from the University of Michigan's Residential College.

Smith is the grandson of Al Wheeler, Ann Arbor's first black mayor. He is the son of Alma Wheeler Smith, a former county commissioner and former state legislator who currently (2014) serves on the board of the southeast Michigan Regional Transit Authority (RTA) – a position that's appointed by the Washtenaw County board of commissioners. His aunt is Nancy C. Wheeler (formerly Nancy Francis), a former Washtenaw County Trial Court judge who retired in 2014.

Smith is married to Rebekah Warren, a Michigan state senator representing District 18. He lives on the Old West Side.

Smith had been seen as a possible candidate for mayor of Ann Arbor in the 2014 election, but decided instead to run for re-election to the District 9 county board of commissioners seat. He was unopposed in the August Democratic primary and defeated Republican John Floyd in November.