Traffic is provided by traffic.com. 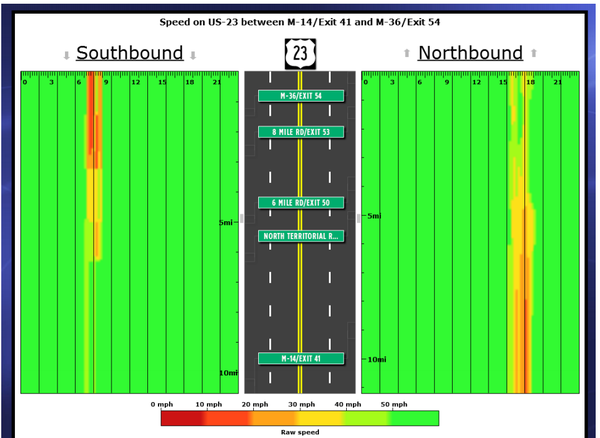 During rush-hours, US-23 is heavily congested, particularly between Ann Arbor and Brighton. Many people think that US-23 needs to be expanded - some want four lanes in each direction instead of two. Some have suggested that raw capacity is a bad approach, because the law of triple convergence states that traffic will increase to fill all available road capacity. Most people, however, acknowledge that ignoring an obvious problem does not cause it to do away. Alternate suggestions have included a third lane in each direction dedicated to high-occupancy vehicles and transit, to enable users of those modes to move more quickly than single drivers and therefore encourage use of those modes, or to use the Ann Arbor Railroad tracks for train or dual-mode bus/train fast commuter transit. This is unlikely to solve the problem, however, as HOV lanes have failed to relieve congestion in any city they have been implemented, and most people use cars to commute.

Construction on northbound US-23 between Barker Road in Whitmore Lake and Silver Lake Road in Livingston County reduced traffic to one lane. Delays turned a 30 minute trip into a 90 minute trip at peak times.