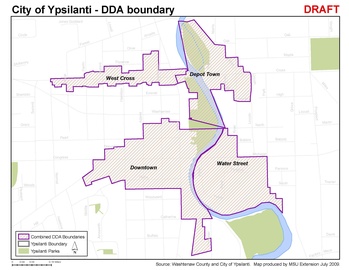 Downtown Development Authorities were authorized by the State of Michigan in 1975, intended to provide a mechanism for stemming economic decay in the downtowns of Michigan's cities. A DDA is a corporation ("public body corporate", similar to a school district) that a city may set up within certain geographic boundaries in order to dedicate public resources to spurring private (re)investment of that area.

Ypsilanti was unique in Michigan for being the only municipality with two DDAs - the Depot Town Downtown Development Authority which covered Depot Town and West Cross Street, and the Ypsilanti Downtown Development Authority which covered downtown Ypsi. The DDAs have been merged, leaving a single organization that also has tax capture over the Water Street project.

TIF is a mechanism by which all increase in taxable value within the DDA boundaries after the founding date generates taxes for the DDA rather than the ordinary taxing bodies - city, county, etc. (School taxes are not included in a TIF capture.) A DDA can take out bonds guaranteed by future TIF income in order to undertake infrastructure improvements.

Ypsilanti's DDA has been the target of criticism for projects like the North Huron Street parking lot reconstruction in 2005, which went far over schedule.

Ypsilanti Downtown Development Authority board membership current list is published on the On Board site. The list below dates from October 2014.