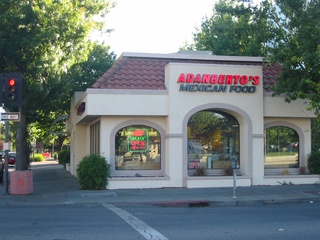 Adanberto’s Mexican Food is a restaurant with two locations in Chico. Both restaurants have taken over buildings previously occupied by Taco Bell restaurants. The East Avenue location has a drive-thru window and the Broadway location has a walk-up window — left over from Taco Bell.

Adanberto’s is a family-run business with restaurants up and down California, including ones in Marysville, Folsom and as far south as San Diego. As a chain, it is as charmingly authentic-looking as other local Mexican establishments, and is a huge improvement over the national chain it replaced.

2009-07-25 09:54:02   When I looked at the menu at their downtown location nothing screamed vegetarian at me (i.e., iirc, not even a veggie burrito was listed). It'd be nice to know if they use chicken stock and lard in things that can be easily made, and quite tastily, vegan. —RyanMikulovsky

2010-10-20 02:58:28   adanbertos has veggis burritos just you have to ask for that , in i ask if is they cook with lard? but everthin is cook with oil just the beans has a little lard , i love this place , they looks so cleaning always -marisol bekerman