Charles Ball was a jeweler and watchmaker who served on the Chico Board of Trustees, and served as its President from 1876 to 1879 and from 1882 to 1885. Both would be the equivalent of being "Mayor" of Chico. He was the original owner of the Charles Ball House at 536 W. Third Street, one of CSU, Chico's Language Houses, now student housing.

Ball was, by trade, a jeweler and watchmaker. We have seen silverware with his name and Pokeepsie, NY on them. Born in 1819, in NY, our family history says that he came West, leaving his pregnant wife and a 2 year old son named Alanson, behind, in Pokeepsie, NY. He left NYC on a sailing ship down to Nicarauga, where he made the land crossing. From there, by sailing ship, to Yerba Buena (early SF name) arriving sometime in '49. We don't have any information on how successful he was or where he prospected. We do know he made the return trip in 1850 because he is shown, back with his wife and now, two children, in Pokeepsie, for the 20th August, 1850 National Census.

The family history further states that he returned again to California, arriving in Sacramento in 1851. We know he practiced his trade there, presumably relieving miners and prospectors of gold, in exchange for watches and jewelery. He is believed to have made at least two more return trips to NY before finally bringing his wife Rebecca and now, 3 children, to California in late 1857 or early 1858, again by ship/land/ship crossing. We believe this is when he chose to relocate to Marysville, setting up his shop there.

The June of 1860 Census shows them, with three kids, in Marysville, Yuba County. The oldest, is the son Alanson, The middle daughter was Mary. The youngest was Almira (Myra) who was my great grandmother. We know he was still in Marysville when Lincoln was assassinated in April of 1865. A letter to the Governor, with his signature, is in the California Archives. He was serving as the Adjutant to the Colonel in charge of the Marysville Rifles Militia group. The letter states the Militia's allegience to the Union following the Assissination, that they were wearing black armbands in mourning and would control and suppress any rabblerousing perpetrated by Confederate sympathizers. 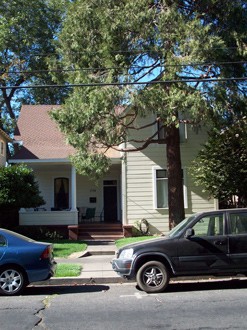 The modern Charles Ball house on West Third Street (photo from anonymous) By the 1870 Census, now 51, the family, less the son, is listed in Chico Township, Butte County, Oroville Post Office. The Ball House, once owned by the College and still in use as student housing was built by him, in 1869. That would indicate an approximate time of when they made the move north from Marysville.

On the 1880 Census, he, Rebecca and Almira (now 23) are living in that house. Myra met my great grandfather John Frank Taggart, a haberdasher working for Bidwell, at the Chico Presbyterian Church, about this time. They were married in 1883 with my grandfather Douglas Simpson Taggart, the first born of 3 sons, arriving in July 1884. We know nothing of the two older siblings, but would have to assume Charles found great delight in spoiling 3 grandsons at the Taggart household. So much so, that by the 1900 Census, he is living with them, in a Victorian at 1st and the Esplanade, following the death of his wife Rebecca prior to 1900. (we have not yet found them on the 1890 Census) He passed away shortly thereafter and is buried at the Chico Cemetery with Rebecca, as are John and Almira Taggart.

Perhaps Charles Ball's greatest legacy was his interests in all things related to firefighting in the early days of California. As most know, the early towns and cities, following the Gold Rush, were firetraps that regularly burned to the ground and were rebuilt. It is unknown to the family today, what kindled that interest but he must have been affected by a fire at some point. In Marysville, he was one of the founding fathers of the fire service there, in the late 1850's to 1860's. For many years, one of the old, horse drawn pumpers on display at Sutter's Fort, was on loan from Marysville. Our family verbal history included that piece of equipment having been acquired, or in some way funded, by Ball while in Marysville. Sometime in the 1970's, Marysville took that apparatus back, to restore it, but its whereabouts are unknown now.

Steam Pumper Later, following the move to Chico, he continued to be active in the promotion of effective and equipped firemen. No doubt with Bidwells' endorsement, he is reputed to have put together the subscription drive that resulted in raising funds to buy Chico's 1st or 2nd steam pumper, similar to, if not the same one, that has been restored and seen in Chico parades today. This public persona is probably related to his political persona that starts out this Chico Wiki story. It would be interesting to see if there are any related families still in the area, from either Alanson or Mary Ball!

(from Douglas R. Taggart, born Chico 1950. Douglas S., Elmer and Beverly were the three sons of John and Myra Taggart. Douglas married Leona Halley of Forest Ranch. Her father Presley Wilkerson Halley had been a Teamster foreman for the Glenn Ranch prior to buying a homestead above Forest Ranch. Leona, my grandmother, told stories of attending events at Bidwell Mansion as a child. After attending Finishing School, she became the personal secretary to the President of Diamond Match in Chico before marrying. Her brother Glenn, worked in the woods as a chokechain setter and, following a severe log-roll injury, was logboated down the Chico Flume to the hospital. PW Halley was, at least for a time, an employee of Bidwell's, maintaining a section of the Humboldt Road while running a 160 acre spread. He also provided lodging and fresh horses for travelers as well as teamster services to the mining and logging activities up Chico Creek, over to Butte Meadows and down to Magalia and Stirling City. He also teamed up to at least Susanville, Chester and Hat Creeks areas. Later, Douglas and Leona ran the Butte Meadows Telephone and Telegraph Co that had a single line set of poles running alongside the old Humboldt Rd and early Highway 32, from Chico to Butte Meadows. A few short poles still exist in sections of the old Chinese built rock walls. They provided the Long Distance Exchange to the Hollywood sound stages, for the filming of Robin Hood in Bidwell Park and the Gary Cooper western, Stand Up and Fight, filmed up at Chico and Butte Meadows. They also ran the original Shell Station and Garage along with a country store, bar and grill about 4 miles north of Forest Ranch, finally closed when the State straightened out the highway in 1962. The so-called Forest Ranch Pioneer Cemetery was given, by Halley, out of the southwest corner of his original 160 acres, to be the locals' resting place, including his as well as Douglas and Leona. Of the other two brothers, Elmer lived most of his life in Chester and Susanville while Beverly moved to Sacramento where he ran a well known printing and engraving business. Contact [email protected])