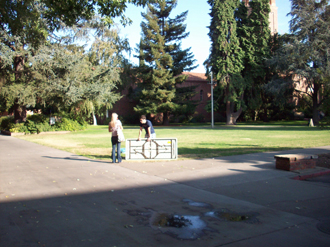 The Free Speech Area is the area of the CSU Chico campus which is specifically designated for free expression (music, art, forums, debates, ranting, etc.)

The Free Speech Area exists to facilitate the exercise of free speech on campus. Toward this end, the University Speech and Advocacy Board has established a policy called the Guidelines for Speech and Advocacy, and has placed administration of the area under the authority of the Student Activities Office.

The Free Speech Area has been the scene of many musical events, speeches, demonstrations, preachers, election forums, etcetera. The area has hosted Cinco de Mayo celebrations, the St Patrick's Day Flapjack Feed and Shamrock Shuffle, and the Womens Center's Take Back The Night and Breaking the Silence.

Other events that have occurred in the FSA