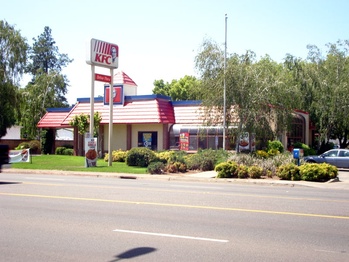 KFC also known as Kentucky Fried Chicken, is a restaurant with two locations in Chico. The Central Chico location used to be just down the street from where it currently is, in the building that now houses Papa Murphy's. The Papa Murphy's building still has the shape of an old KFC, although the colors have been changed to green to match the pizza chain's color theme. KFC is owned by the same company as Pizza Hut, Taco Bell, Long John Silver's and A&W Restaurants.

KFC has introduce its new Kentucky Grilled Chicken as a healthier option. Oprah offered a coupon for a free two piece grilled chicken meal but restaurants ran out of chicken. If you still have the coupon, you can redeem it for a raincheck and you will get a free Pepsi when you get your meal.