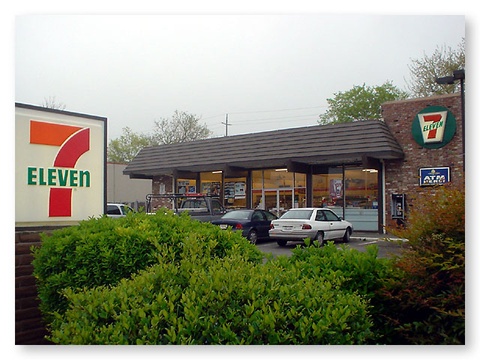 7-Eleven is a convenience store just like every other 7-Eleven from Kathmandu to Kentucky! They offer all kinds of sundries from tampons to Ben & Jerry's ice cream, snacks, sandwiches, hot dogs, beer, & smokes. They are most widely known for their Slurpees (frozen soft drinks). The store also has a soda fountain. There really is a 7-Eleven in Kathmandu as well as in Bangkok. When you purchase nachos, you get an unlimited self-serve supply of hot nacho cheese.

There is a Citibank branded ATM inside the store which Citibank users can use without paying a surcharge. Since there is no Citibank in Davis, Citibank users can use the ATM here without any fees. It is a Vcom brand ATM with deposit capability. The ATM is also part of the Co-Op ATM network and is free for members of all Davis credit unions and virtually all other credit unions across the country as well. There is also a payphone for public use.

Twelve 7-Eleven stores were temporarily transformed into Kwik-E-Marts in anticipation of The Simpsons Movie. The promotion ended August 1, 2007.

As of March 15, 2010, the Davis 7-Eleven location has a convenient Redbox DVD/Blu-ray/video game rental machine in front of the store.

The store changed hands and replaced most or all of their staff in mid-2012. It was also remodeled. As of August 2012 this location is renting out kegs. The following brands are available as kegs: Coors Kegs, Miller kegs, Budweiser kegs.

Older comments have been archived here.

2011-07-12 01:23:26   After walking in post 'Free Slurpee Day' all I can say is some people are disgusting, greedy slobs. There was such a mess it was utterly ridiculous... The staff was cleaning for almost two hours trying to recover from the insanity. —Wes-P