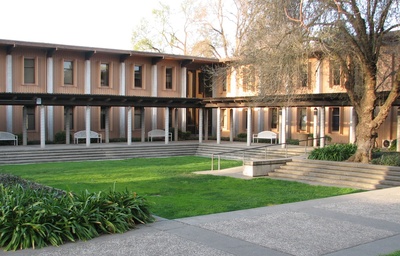 Courtyard behind the building

Academic Office Building IV was the home of the Graduate School of Management and the offices of faculty from the Communication Department. It is now home to the School of Education and the building is called that. It is located On Shields Avenue across the street From Voorhies Hall and next to Sproul Hall and Olson Hall. It was built in 1976.

The "AOB" designation is a catchall for naming primarily administrative buildings before the school manages to find someone worthy and/or rich enough to name it after. AOB II is now Voorhies Hall and AOB III is now Kerr Hall. Anyone out there know what AOB I is now called?