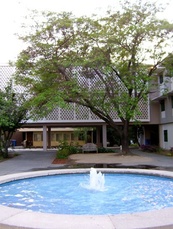 The side of Voorhies that faces the street heading Downtown looks particularly strange during the night.

The Voorhies F-Bombs had a losing season, but they looked great in their trademark grass-colored t-shirts. Voorhies Hall, designed by Gardner Action Dailey, was named for Edwin C. Voorhies and houses the English department, the University Writing Program (the purveyors of the English Comp and upper-division writing requirements), the Davis Humanities Institute, the Medieval Studies department, and a few others. It was built in 1959. Fondly called "Voorhideous" by some of its inhabitants. This is one of the buildings on campus that is primarily offices, not classrooms.

Voorhies Courtyard is a rose garden, with a giant tree and some benches. Not to mention the nice (though constantly leaking) fountain.

Voorhies Hall is also the home base of the Voorhies F-Bombs, an Intramural Ultimate Frisbee team made up of English Graduate Students.

I've had my office in Voorhies for four years, and I've never heard the term "Voorhideous." TonyMagagna

Maybe if you'd leave that office you'd hear people call it Voorhideous. Even I have called it that. I've heard just about everyone call it that. NathanMilos