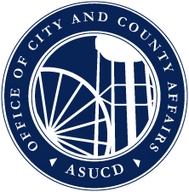 The ASUCD Office of City/County Affairs is an ASUCD unit that researches and analyzes city and county legislation to make sure that undergraduate students are fairly represented, and work to educate students about city and county issues which affect them. The office helps students with housing issues and organizes Housing Day.

The Office of City/County Affairs works to improve relations between university students and the community. They focus on improving student relations with the city of Davis and ensuring that the student population is represented in city affairs. Through special projects, the office seeks to serve as a liaison between the city and ASUCD. If there are any student concerns or particular projects you would like to see implemented, please feel free to contact the Office of City/County Affairs.

The Director is a member of the ASUCD Student-Police Relations Committee and the City-UCD Student Liaison Commission, as well as the ASUCD Cabinet.

*City/County is the only ASUCD advocacy unit to actually bring money into the association. So while the budgets for Lobby Corp and University Affairs come exclusively from students, City/County uses Housing Day as a way to bring in funds for the association and relieve some of the burden on students. In fact, the 2010 Housing Day brought in so much money that the proceeds from the event funded the office's expenses for the entire year, making the unit subsidy-free for the first time. 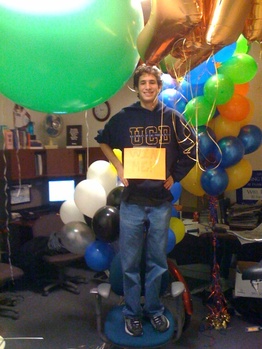 The Office on a particularly festive day.

2008-07-31 20:56:05   Other than housing day, I am curious to know how the city/county affairs office "work[s] to educate students about city and county issues which affect them"... —PeteWillits

2009-10-01 13:41:31   I know its been a while since you posted this question, but for Pete if you're still out there and anyone else interested. Like EVERYTHING else in ASUCD everything is theoretically and is highly contingent on the work ethic of the particular student in charge. City/County has in the past held forums, but student participation/interest is often low as would be the case with most municipal level governments. Most of their work consists of representing student interests at various bodies. —StevenLee