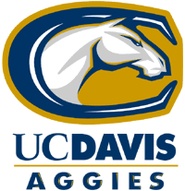 The Aggie Logo is owned by UC Davis

The current Aggie Logo was designed in 1999 by the marketing firm SME Design. The Aggie Logo is primarily used in athletic contexts. The UC Davis Logo is used in informal situations generally and the Seal Of The University is used in formal contexts. The University spent $40,000 on the design of the logo as well as several variants. This logo now appears on everything from the General Catalog to official letterhead and Aggie Pack clothing.

The logo depicts a mustang inside a letter C for the University of California and it makes use of the colors blue and gold.

There is also the Oldschool Aggie Logo which is used primarily by amazing groups such as the California Aggie Marching Band-Uh. They cherish this university's history very much.

The Aggie Logo is furiously copyrighted by the University, so if your club wants to print it on a shirt, make sure you get the design approved first. Actually, you can't even put the words "UC Davis [whatever]" on your shirt without getting it approved first. See the usage guidelines that UCD puts out, which aren't on the (quite extensive) Brand Communications website, but rather has its own document.

One of the larger renditions is the Aggie Roundabout.