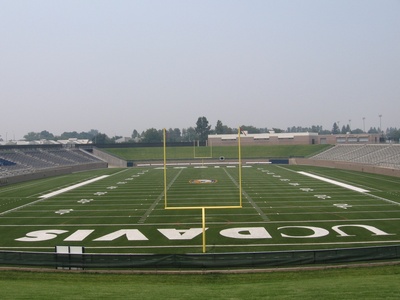 Aggie Stadium is a multi-use sports facility home to football and women's lacrosse. It is located on 20 acres west of La Rue Road, just north of the Health Sciences Complex.

The stadium seats 10,743 and was designed to be able to expand to a capacity 30,000. It features a modern press box, the Bob Foster Team Center, a synthetic turf field, concessions, and restroom facilities. The scoreboard draws a whopping 61 kW of power, including 47 kW for a Daktronics ProStar VideoPlus LED video display, which Mediaworks Video sometimes operates during games.

For the 2007 season, all games were held during the day, as there were no stadium lights. Stadium lights were installed on May 29, 2008 and all 2008 home football games are scheduled as evening games (except the Causeway Classic, an afternoon game). According to a Dateline UC Davis article, there are a total of 172 light fixtures rated at 1500 watts each and 8 rated at 2000 watts (which can operate by generator in the event of a power outage). Forty-five lights are mounted on each of four 120 ft poles. Total, the lighting system uses 274 kW of power. The stadium's sound system is driven by a rack filled with 3 kW and 1.8 kW audio amplifiers.

The stadium is also notable because the Scooter Cop has been sighted there on multiple occasions.

Naming rights for the stadium itself are priced at $10 million and have not been sold yet.

Construction began in 2005. The first game played in the stadium was a women's lacrosse game in early 2007. It officially opened on September 1, 2007 with the 2007 Aggie football season against Western Washington University. The stadium was formally dedicated October 13, 2007.

Funding for the $31 million stadium was provided in part by the the Facilities and Campus Enhancement Initiative, a fee increase passed by students in 1999. This covered roughly two-thirds of the cost, with the rest coming from private donations and campus funds.

Aggie Pack, tired of squeezing their staff into the Athletics Annex, decided to take over the press box for some extra office space sometime in 2008. Yes, they really plan on moving out before each game and moving back in afterwards.

Lights on a foggy night

In reverse order, newest to oldest: 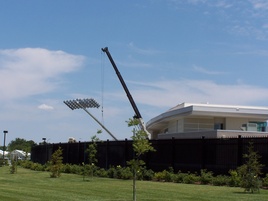 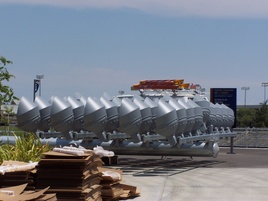 The lights before being put up; note the size compared to van in the background. 2008-05-29

First look inside from June 2007, just before the inaugural football season 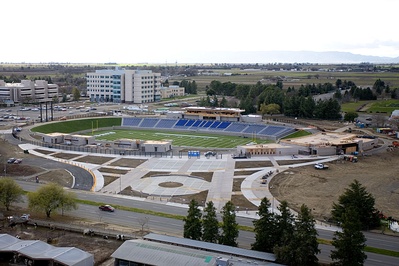 By Fall of 2005, ravenous construction equipment had dug a giant hole at the stadium site, presumably the size of one (1) Multi-Use Stadium. It would be a sweet place to take a dirt bike. 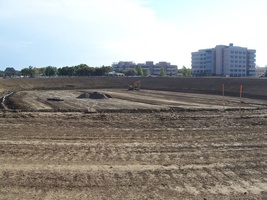 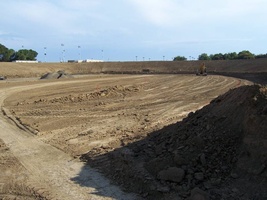 On 2005-01-24, the California Aggie reported that the UC Regents had voted to approve the construction of the stadium. 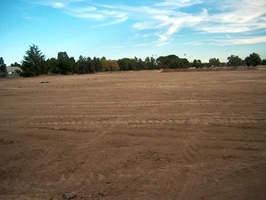 Does anyone know what the university is going to do about the cows over here? I can't imagine they're going to be happy with all the added noise and traffic the stadium will bring... -TonyMagagna

Maybe the cow smell is supposed to add to the intimidation during football games. -GiladGurantz

Brings new meaning to home-town advantage. Our Aggies are used to it, whereas the visiting team will be busy holding their breath. We could station cows and pigs around the stadium during football games. This could be a significant advantage...

"Supposing you don't want to live down the 'cow town' designation..." - JustinCummins

2007-07-21 19:31:44   Wait, i thought this stadium WAS for the cows. There was a big descrimination lawsuit going on not too long ago, where cows complained as residents of Davis, they dont get anything near what students get. Then, they settled for a stadium. and it is taking longer than expected because cows cant come into agreement about what kind of grass to use. Some like the africa (sweeter) kind, and some like the asian (a little bitter). —KevinW

2007-08-21 14:50:58   I heard the stadium is going to be totally eco-friendly, everything sold there compostable or recyclable with receptacles for both. No trashcans. —AllisonEriksen

2007-08-21 18:28:14   The money for lights has arrived, but it came in a little to late. With only a limited number of companies that build lights and the fact they they have to be custom made and ordered, don't expect them to be up for the 2007 season. —ChrisPerry

2007-08-22 10:42:06   Does anyone know why they keep watering the big field on the corner of Hutch & LaRue to encourage the weeds to grow? I vaguely remember hearing about a "fun zone" but I don't know what that would be. —ScottWeintraub

If you're a VIP, there is a lounge you can go to downstairs from the press box where you can booze it up. I don't know what kinds of booze are served nor am I certain of the cost.

There are two issues with using the lights from Toomey. The first is that Toomey isn't being retired. It's still used for field and track events, among other things. Toomey still needs the lights because some events still happen at night there. The second is that each one of those lights is a custom job. Sure, they'd work, but their configuration would probably be suboptimal. —WilliamLewis

2011-09-18 18:49:19   We sat in the grassy end zone area at last night's game. It's a fairly steep incline, but a good place to the kids to run and roll around. I know it's "stadium food," but it was awful. The soft pretzels tasted like they had been frozen for years and barely reheated. Same for the popcorn. We decided against the severely burned hotdogs and the cheez-in-a-can nachos. Never mind the prices. I wish a university that prides itself on food, nutrition, and sustainability could provide decent fare at the game. —NoelBruening

2012-05-26 11:15:07   There's a certain emptiness about this place every time I've been to an event here. The football games just haven't been as lively as they were back at Toomey. Everything just feels a bit... spaced out at this place. —CecilioPadilla