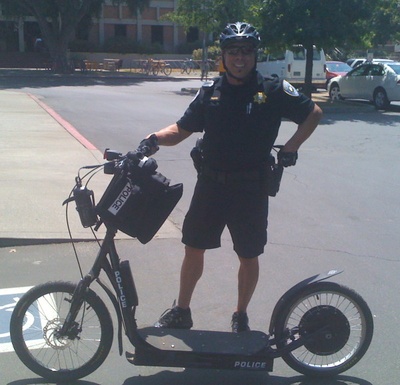 Ralph Nuno, aka the Scooter Cop (not to be confused with Bike Cops) is a very elusive figure. He is a police officer who is seen riding around on what might appear to be a larger version of the generic kick scooter, much like the kind that children play with. It's called the diggler. It has 4 motorcycle batteries and can hit a max speed of about 32 mph. You can sometimes see the cops playing with it around the UCD police/fire building and the WEPS. The Scooter Cop has been seen at the Memorial Union yelling at students to walk their bikes and at Aggie Stadium during football games.

With that minimum usage, it seems to some like a trivial usage of funds for the UCDPD. While the Segway vehicles that various police departments use for similar events and purposes cost several thousand dollars more and don't have the speed burst, they add a lot of height, maneuverability and greatly expand the officers view. Although it might have seemed better for the UCDPD to invest in a bicycle fitted with a stronger electrical motor, this scooter still does offer some height, probably didn't cost over a thousand, and gives the officer more freedom of movement (could jump off the scooter and run easier than one can from a bicycle). And come on, it's neat! 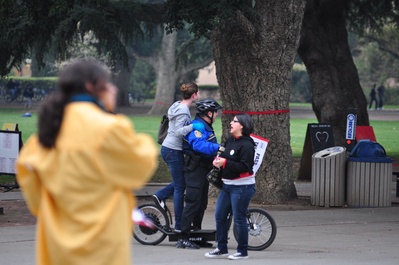 2009-08-10 00:14:43   It is actually an electric scooter that can get up to 35 MPH for short periods. You can sometimes see the cops playing with it around the UCD police/fire building and the WEPS. Why UCDPD bought it I don't know... It seems like a waste of money to me. —ARWENNHOLD

2009-08-10 09:28:06   Are you sure it's 35mph, and not maybe 25mph? Even that would surprise me, electric based tends to be very weak. Vespa-style riding scooters in the 50cc gas-powered class can't top 35/40mph really, and electric versions can't top 20/25. To think of a 'kick scooter', I'm guessing a Go-Ped style, I really don't think that thing can get even close to 35mph. And that is pretty fast, a low-slung long Go-Ped style scooter at that speed is pretty risky/unsafe. I'd bet it has a top speed of 20 to 25mph, maybe normally cruises around at 10 to 15. Is it custom-modified somehow? Or actually gas-powered? —ES

"After an investigation, the Department suspended Nuno for ten days for sexual harassment. Nuno appealed through the legal defense fund of the Peace Officers Research Association of California to an arbitrator.

The arbitrator reversed the suspension. The arbitrator concluded that not just Nuno, but a significant number of employees, engaged in the sort of sexual banter which formed the basis for one of the complaints against Nuno. The arbitrator held that since the City permitted such an atmosphere to exist, it had not placed employees on adequate notice that such conduct could result in discipline."

So he was suspended for sexual harassment, but the conviction was overturned because, well, OPD is filled with a bunch of cops who sexually harass women. So I would think twice when I look at that picture with the girl on his scooter. ftp —MK47