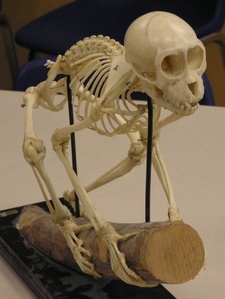 Fossil and skeletal primate specimens (such as this Macaca macaque) are a popular part of lab sections in the evolutionary wing.

Anthropology is a department in the College of Letters and Science.

Anthropology is the holistic study of the human species in all its physical and cultural variation. One of the distinguishing characteristics of anthropology as a member of the social sciences is its focus on cross-cultural variation, in particular among small-scale, non-western (and many times non-industrialized) societies. In addition, an interest in the phylogeny of our species leads anthropologists (more specifically primatologists, paleoprimatologists, and paleoanthropologists) to study non-human primates.

An interesting point to note about the anthropology department at UC Davis concerns the delicate balance that has been struck between the interests of the evolutionary and sociocultural wings. While the two wings share some resources and generally get along amicably, departments at other schools (notably Stanford) have been torn into two separate departments because they couldn't reconcile their differences. The fact that UC Davis' anthro department consists of two distinct but joined wings is a real strength. There are a unfortunately a rare few in the department that view the separation in terms of a contentious polarization, but most others recognize that we are lucky to be able to learn from one another.

The Anthropology department offers two archaeology fieldschools for the summer of 2005:

Comments about Anthropology at UC Davis

2009-02-16 18:39:54   I've had some very good anthro professors. Tim Weaver's good, McHenry's usually very good. Most of my upper division evolutionary classes have been taught well by folks who know a lot about what they're teaching. I had Yengoyan for Ant 1, and though he's pretty unorganized, he is a real thinker. There's a lot of profound thought in his classes, you have to dig a bit to find it though. —AaronD