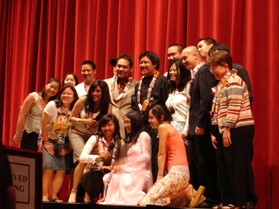 The Asian American Studies Program (ASA) offers interdisciplinary majors and a minor that examine the experiences of various Asian American groups in the United States. Pertinent to these experiences are the historical, cultural, legal, political, social- psychological, class, and gender contexts for Asian Americans.

Asian American Studies prepares students for a variety of careers. Given the multicultural nature of society and the increasing relations with different societies, many occupations seek individuals with background and expertise in ethnic relations and cultural issues. Those who major in Asian American Studies very likely do so because they see a need to gain an in-depth understanding of the politics and experiences of Asian Americans.

After graduating, the possibilities for Asian American Studies majors are endless. Graduates often enter the fields of teaching, research, government service, health careers, community advocacy, journalism, business, public policy, law, social services, etc. as well as graduate schools for advanced degrees in various disciplines. The basic goal, to provide a rich education in the history, culture and politics of Asian Americans provides many opportunities for majors from a wide rage of backgrounds and experiences.

The department has some well known professors/researchers on staff including the self-proclaimed world renowned professor Darrell Hamamoto. He produced a 50 minute long pornographic movie film called "skin on skin" with the full endorsement of the department.

ASA Major is an A.B. and is under the College of Letters and Sciences. There are two emphasis, humanities and social science. Under the humanities emphasis, students can take the literature/culture track or the history/culture track. Under the social science emphasis, students can take the anthropology track or the sociology/psychology track. Students can also talk to the Student Affairs Officer, My Diem Nguyen, about creating a specialized track. Students with a humanities emphasis are required to take one year of an Asian language. Students can satisfy this through UCD or by taking Cantonese, Farsi, Korean, Tagalog, or Vietnamese through Sacramento City College.

ASA works with the Asian American Association to produce the annual Asian & Pacific Islander American Searchlight. This guide is for students about the history of ASA at UCD and APIA history in Davis, faculty and staff in the ASA department, ASA minor and major requirements, ASA courses with descriptions, on-campus resources and Asian American and Pacific Islander Organizations. Students are able to get unit credits or internship notations during the spring quarter preparing the following school year's Searchlight.

Wiki-ers who are ASA majors or minors -