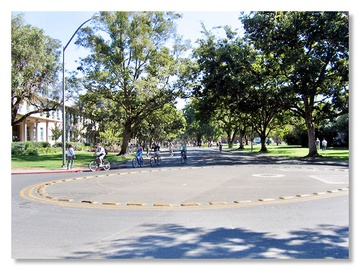 A still, peaceful bike circle before class lets out.

A bike circle is an easy way for many bikes to cross without anyone killing each other. At least, that's how it's supposed to work. The Davis Wiki Logo is based on the bike circle signs.

Always go around them counter-clockwise (as seen from above). If you don't, someone's bound to spot you and think you're a freshman. Worse yet, you could cause an accident. If you're a pedestrian, USE THE CROSSWALKS and don't walk through the bike circle. It slows traffic down and increases the risk of you getting hit.

Also critical to smooth bike-circling is to observe the proper right-of-way: Bikes already in the circle have the right-of-way over bikes entering the circle.

The area in the middle of a bike circle is usually thought of a "No-man's-land", since no one bikes through it, and few people rarely walk across it. It would be a perfect spot for a picnic in the fall, since you'd have a good view of all the bike crashes — bring lawn chairs.

Similar schemes called traffic circles or roundabouts, meant to accommodate motor traffic, are in place on roads in Davis and West Village.

In late August 2007, some of the bike circles were painted with Aggie logos.

On the first day of every school year, crowds of upperclassmen gather around the California & Hutchinson bike circle to witness the Freshman Bike Derby Apocalypse.

Stopping to chat within a bike circle is not recommended, nor is walking through with a bike.

2005-10-11 10:59:23   Putting those large concrete bumps there, and on bike paths, is hazardous -the cure is far worse than the problem. They should have just painted lines, not the bricks. I think there should be a movement to remove the bumps. —SteveDavison

2005-10-11 11:03:15   Since the space inside is wasted, why not fill it with a large round flower planter? It would be more even more effective than the bumps, plus it would add beauty and be environmentally friendly. Intersections waste a lot of space, enough for a large house -look at the picture. —SteveDavison

2006-10-29 12:07:02   Part of the point of the circles at the intersection is to make you slow down. In addition to slower speeds being safer, it also makes all the traffic flow in one direction, which is safer than your standard intersection. —MatthewTom

It really sucks when a large pack of roving students enters in the circle at the same time, forcing you to flow with them or cause a major incident, people go to slowly anyway. ~Davidpoole