Bum, Bum, You've Been Here Before is one of the weirder looking sculptures on Campus. It was created in 1967 by Tio Giambruni while he was a professor at UC Davis. It was cast out of bronze and aluminum at a campus foundry, and for that reason was considered a technological tour-de-force. From 1969 until 1976 it was on Russell Boulevard. It was then moved to central Campus over the spring break of 1987. Around that time it was appraised at $28,000. There was a front page article about this in the April 9, 1987 edition of the California Aggie.

People don't sit on it nearly as often as they should. 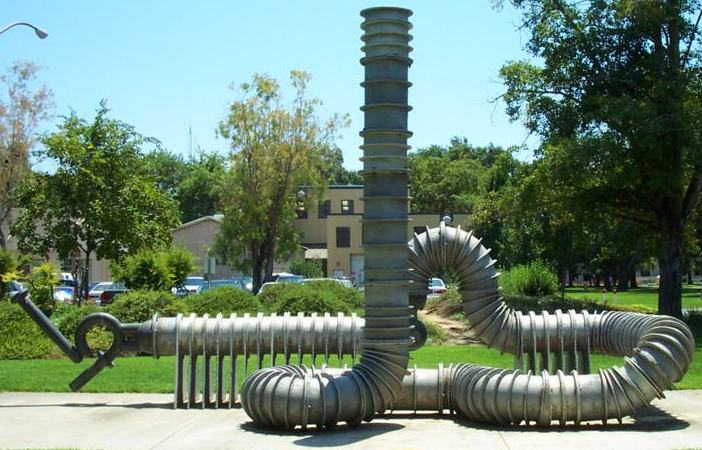 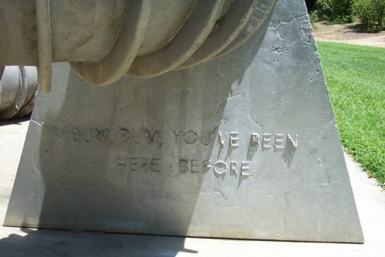 If you look closely at it, you see the text "BUM, BUM, YOU'VE BEEN HERE BEFORE" written in various places on it.

Oh, I went to a house, and I knocked on the door, The lady said, "Bum, bum, you've been here before." Hallelujah, I'm a bum. Hallelujah, bum again. Hallelujah, give us a handout to revive us again.

— From the traditional Hallelujah, I'm a Bum

While experts argue who wrote it, alg says it was Darwin L. Hayes, while DanMasiel points out that Utah Phillips, an amazing anarchist folk singer from Nevada City sings this song almost everytime he performs at the Whole Earth Festival. JabberWokky recommends the the 1928 recording by Harry McClintock (of "Big Rocky Candy Mountain" fame).