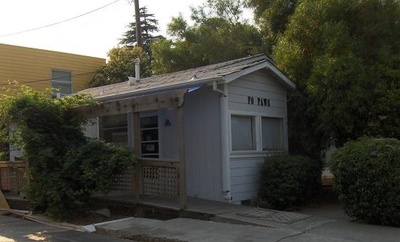 The owner of Fo' Paws, Charlene Benjamin, sadly passed away on January 18, 2010. Details can be found on this blog. Groomers from Fo' Paws went on to found Fo' Paws Pet Grooming and Pawsitive Groomers.

Fo' Paws was a pet grooming service. Their motto was, "The best of care for the best of your friends."

What do you remember about Fo' Paws?

2007-11-10 13:28:31   After one dog owner after another recommended this place to us, we finally gave it a try, and were not disappointed. The thing I like best is that you feel more like you are taking your dog to a friend than to a grooming salon — Fo' Paws is in a small, homey house, and the people who work there are warm and friendly and obviously care about animals. They were able to make specific suggestions for how to have our dog cut, and those turned out very well. And somehow they are able to get the dog's fur amazingly soft. Highly recommended. —CovertProfessor

2009-02-17 18:11:33   I had read the review raving about the "homey house" feeling and how it was like you were taking your pet to a friend, and decided to try it out. I had the exact opposite experience. First, I was quoted a price according to the weight of my dog, and when all was said and done, they had upped the price (they claimed my dog was heavier then I had said, however she hasn't gotten any bigger since her last vet visit). In my experience with customer service, and as a customer, this is quite unprofessional. Also, I decided to come back early and wait around in the waiting area until my dog was done. This apparently was not ok with the staff there. They made me feel quite un-welcome, and that it was a strange thing that I would sit and wait for the last 45 minutes of the appointment. They also complained loudly about my dog, while I was waiting, and how she didn't want to stay on the table while they were trimming her. Afterward they told me it took two of them to keep her there. This was odd to me because, although my dog does not enjoy getting groomed (what dog does really?), she was well behaved the last time. At that time, I took her to a little old lady who did the entire thing alone and didn't complain at all when I picked up my dog. I recounted this story to the one of the staff at Fo' Paws, and she walked in the back and told the other ladies. It seemed that none of them believed me and they even mocked me. After I left, I started to notice that my dog's haircut was actually done poorly- chunks of longer hair hanging all over. So, when I got home, I trimmed those parts myself. Maybe it was just a bad day for the ladies of Fo' Paws, but I will certainly never take my dog back there. —tufftiff

2009-09-18 21:18:19   I have been bringing my bichon frise, and my pug here for years. They are always professional, friendly, and very accommodating. I have had several dogs, at several different groomers over the years, and this is by far the best I've encountered. I showed up for an appointment once when they didn't have my dogs on the books. They insisted on doing them, even though I told them I could just take them to work and bring them back later. I highly recommend them, literally, to all my clients. —Davidlm