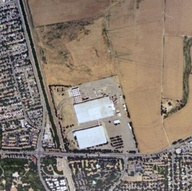 An aerial photo of the Hunt-Wesson plant from 2003. (photo copyright City of Davis).

The Hunt-Wesson Plant, a part of Hunt Foods Co., once employed many immigrants, students and residents in its tomato processing operation, but has been shut down since October 1999. The cannery was originally built around 1963 and used to scent the Davis air and contributed to hundreds of tomatoes found rolling around and squished near corners. Building the plant was controversial at the time.

"50 years ago: 1956 Davis - Local residents voted, 1,473 to 900, in favor of locating a multi-million-dollar Hunt Foods Inc. plant in Davis. The vote came in a special straw ballot called by the city council to sample public opinion in a controversy that has stirred considerable heat between the pros and the cons. Results are not legally binding on the council, but will serve as an indication of the sentiment of the community. Proponents of the location of the Hunt plant in Davis had hoped for a two-thirds majority." - The Daily Democrat 11/13/2006

It was one of the last of dozens of tomato processing plants in the area to close, and was one of the few unionized industries within Yolo County — it was the only unionized manufacturing industry within the City of Davis during its operation. The facility, with its 564,000 square feet of building space was closed down without notice when owner Con-Agra Inc. moved its work to an Oakdale plant — workers showed up for their checks and were told about the closure. Despite its abrupt closure, Con-Agra joined with the union representing cannery workers and successfully secured a $910,000 grant to provide job training and placement for displaced workers. Con-Agra put the property up for sale shortly after closing it.

In 2006, Hanlees Chevy - Toyota - Scion leases a portion of the 100-acre property as an overflow lot for their new cars and during the summer of 2006 the property was also the site of UNCANNY: Art at the Cannery.

In 2009 the site was used for the Emerson Carnival.

NC Davis Development Corporation proposed to begin demolition of the plant "on or about June 10, 2006." The land may someday be home to Cannery Park, a mixed-use development including "approximately 600 homes, 11 acres of office, parks and open space."

Inside the main building.

A pile of concrete from the demolition dwarfs the machines that are processing it.

A lone remaining tank at the north west corner of the lot with rubble in the foreground.

"It would be great to see it put back into operation either as a tomato processor, or some other revenue generating source of jobs. There are a variety of high end confectioneries in the Fairfield area; maybe Davis should be known for its own milk chocolate."

"Unless broke into here to take band pictures and almost got arrested." - TheRadish

2005-10-06 15:52:51   I haven't heard of anyone mentioning the impact of Measure X on the Hunt plant one way or the other. It would seem that if X passes that this property will never again be usable as an industrial facility. —JasonAller

2006-01-29 13:22:47   If anybody knows anything else on the plant or has a story of breaking in please contact me, [email protected] I'm doing a news story on the plant and need all the information I can get. Thanks. —MichelleLeung

2006-06-02 10:09:07   yeah, this place is amazingly fun to explore. back when acme rehearsed in the cannery, I went exploring. It was awesome. Almost as fun as exploring Angel Island. That place has some awesome exploring grounds. —JulienBiewerElstob

2006-11-17 21:01:31   I worked for Avi from 89-92 in Industrial Engineering. I maintained and wrote several database systems there. Good times. I saw the flattened plant a week ago. I guess that's what they call progress. What a shock and a rude ending for the old-timers there. - Terris —TerrisLinenbach

2006-11-18 10:40:31   I should add that there was some discord among the old timers with the Wesson name. The plant was Hunt's as far as they many were concerned. In my opinion they understandably distrusted the intentions of their corporate masters. The closure of this plant is just another sad footnote in the history of American corporate behavior. —TerrisLinenbach

2007-01-05 01:46:51   It's very sketch not seeing the warehouse anymore, one of my friends who grew up on my street was very taken abake when I pointed out the fact it was missing when we were on the hill. It's just weird not seeing it there, being able to look out and across. —StevenDaubert

2011-09-09 10:07:58   I still remember the scent of cooked tomatoes that would fill the town every year (early August). That smell to me meant summer was almost over, and it was almost time to go back to school. Despite the association being a negative one as a kid, it's a fond memory... I still miss that smell during warm summer nights. —OldDavis73