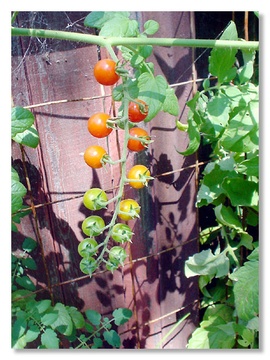 These cherry tomatoes make for great garden snacking when you're out pulling weeds! 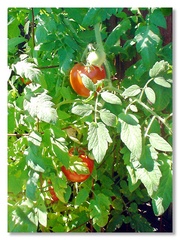 Tomatoes have played and continue to play major roles in the history and agriculture of both Davis and the surrounding region. When the Hunt Wesson Plant was operational the smell of tomatoes being processed scented the town. Later, both the square tomato and Flavr Savr tomato were developed on campus and at Calgene respectively. Yolo County is the #2 producer of processing tomatoes in the state. Tomatoes even play a role in local art as exemplified by a Portrait of a Plump Tomato. Many UC Davis students drive tomato trucks to earn extra cash in the summer. Eager to maximize truckloads, these carriers are often overloaded and you can find bruised and broken tomatoes on roadsides and especially along freeway ramps; in the past, drivers were cited for the number of tomatoes with which they were caught littering the highway.

Tomatoes fall within the nightshade family, grow extremely well in our arid climate, and actually produce better when slightly heat stressed. Wait to plant starts until night temperatures reach a low of 55 degrees F. to ensure pollination early in the season. Overwatering of tomato plants in your garden result in large, leafy plants with few fruits, while stressing the plants will give you smaller bushes with a larger volume of fruit. Gardeners may also want to resist the urge to heavily amend their soil with nitrogen-rich materials such as manure, as these will encourage heavy foliage and reduce yield.

Blossom drop can occur in many varieties as a result of high daytime temperatures [over 92 degrees F.] accompanied by high evening temperatures [over 68 degrees F.]. Consecutive days of extreme high temperatures coupled with dry soil will often cause blossom drop; high/low humidity, poor pollination and insect/disease stress can aggravate the problem. Blossom drop is often seen in plants that appear otherwise vigorous — anything contributing to strong foliage growth, e.g. excess nitrogen is typically accompanied by poor blossom set. Many of the heirloom varieties are particularly temperature sensitive.

If you've never grown tomatoes before, make sure you allow lots of room for each plant and cage each plant with welded wire fencing large enough for you to squeeze your plump little hands through — don't bother with those silly cages sold to contain plants, because they're far too weak for a real tomato plant.

All parts of this plant are poisonous if ingested and dog owners should be alert to the following symptoms: hypersalivation, poor appetite, severe gastrointestinal upset, diarrhea, drowsiness, CNS depression, confusion, behavioral change, weakness, dilated pupils and slow heart rate. These symptoms will result from ingestion of potato, eggplant or any other members of the nightshade family.

For a listing of other edible and ornamental plants found in Davis, visit our Town Flora. 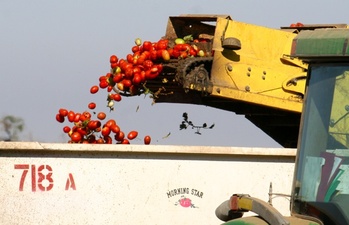