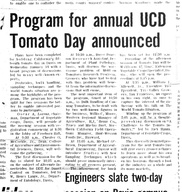 1970 was the 15th annual "UC Davis Tomato Day" conference. Jack Hanna himself was winding up the program with "a thought provoking discussion on 'A Challenge to the Tomato Industry'" 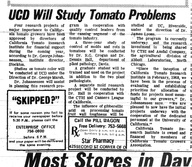 Tomato research was in the news in 1968

The square tomato, AKA "cultivar VF-145", is a renowned type of tomato that was developed at UC Davis. Interestingly enough, it is not actually square in shape any more than Coral Bells are made from coral or Baby Tears are related to crying infants. However, the tomato is called "square" because it was developed to be less round than other tomatoes so as not to roll off conveyor belts; in addition to this improvement, these tomatoes pack into boxes better and ship with fewer losses (e.g., ripped or smashed tomatoes) because of thicker walls. These are used by-and-large for the processing market.

In the early 1950s, California's tomato industry was threatened due to a lack of laborers to harvest the crops. In response, the UC Davis Agricultural Engineering department developed a mechanical tomato harvester. Unfortunately, this machine crushed the tomatoes.

The Vegetable Crops Department came to the rescue by breeding a firmer-skinned tomato—also known as the square tomato—that the machine could not crush, thus keeping California's tomato industry alive. The actual inventor of the square tomato was Gordie "Jack" C. Hanna, an Associate in the Agricultural Experiment Station, Professor in Truck Crops, University of California, Davis (1938-1967), and was also a Plant Breeder with a private company, PetoSeed, in Woodland CA. The conference room of Asmundson Hall is known as the Jack Hanna room. The walls are covered with plaques, photos, awards, and certificates commending Jack Hanna for his work, especially from the tomato industry.

Hanna worked right off the fields by Hutchison Drive. He would stand in the fields, walk among the plants collecting random tomatoes, and then go and throw them out onto the road as a test. He kept and rebred from the plants featuring tomatoes hardy enough to survive his test, eventually giving us the hardy tomato that can withstand being picked by machine and transported by truck.

Both the square tomato and the tomato harvester were embraced by the processing-tomato industry. Processing tomatoes are harvested by large machines, dumped into those white bins you see semi-trucks pulling, and transported off to the nearest processing plant. You can always tell when it's tomato-pickin' time by the dozens of tomatoes on the side of the highway.

According to the UC Davis Spotlight article, "Gordie 'Jack' Hanna was the first to take a good, hard look at the round, ripe tomato and announce: We’ve got a serious problem here. Hoping to rid the world of the dastardly spherical burger-toppers, Hanna introduced the first square tomato in the early 1950s. Ironically, the 'square' tomato isn’t really that cubical. Nevertheless, most of the tomatoes you see in grocery stores today are of the Gordie Hanna variety."

The square tomato was featured on an episode of Modern Marvels, with local UC Davis professors explaining how important it was for the tomato industry.

Professor Emeritus Bob Sommer is noted for critiquing the wisdom of the square tomato in the mid 1960s. The story is recounted in one of his books (probably Expertland, 1963 — any bored wikifairies in Shields Library can verify this) has some commentary on the square tomato being an engineering marvel but a culinary tragedy. Sommer has also stated that if Davis hadn't become well known for bicycling, it would probably be been best known for inventing the square tomato. UCD student Ted Buehler used this analogy in his presentation on the history and future of bicycling in Davis in Feb 2007. See image 43 ("My Conclusions") of his Bicycle History Presentation.