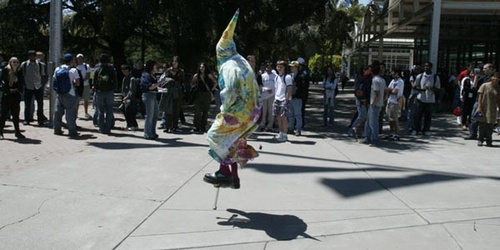 The Ku Klux Klown may be hated by the DCR and the LGBTRC but he is loved by many.

He makes eracism fun. The KKK shouldn't have a monopoly on the using the letter K three times in a row. So the Ku Klux Klown is taking over the Klan and making it fun. So bust out the tie dye and the pogo stick and fight some racism and homophobia.

Some have alleged that the DCR hate the KKK, however there has been no confirmation of this.

Once, a volunteer at the LGBTRC tried to forcibly take off the hood of the Ku Klux Klown because he was supposedly offended people during his protest of the DCR during "Conservative Coming Out Day". The Ku Klux Klown was very confused because he was on the side of the queers and if the Klown had to stop offending people then shouldn't all the faggots and dykes in the LGBTRC have gone home because they were offending people. Of course not. - RobRoy