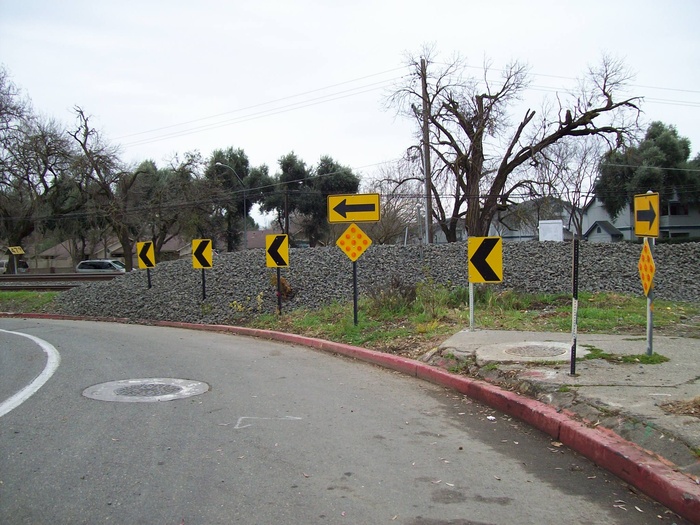 This little garden was maintained by George Swazo a homeless man who now has some flowers near Target. It sat right along the bend in L Street that ends L and becomes 2nd Street.

Most probably missed it as they zipped by in their cars. It varied in size and beauty depending upon the season and the amount of time its maintainer had.

The Garden came and went with the seasons. As of November 2004 it was being re-planted, but then again it perpetually changed! With the major US holidays festive decorations adorned the garden, and as new items became available they appeared in The Garden, often spray painted colors like pepto-pink. Plants came and went, whether perennials, cacti, or annuals. The Garden seemed to be a temporary art installation, somewhat like a sand painting or balanced rocks.

There was a California Aggie article and interview with Swazo about the garden in June of 2006.

From a randomly found Craigslist posting:

As we have all noticed, along 2nd street (just out of downtown, the near 90 degree turn) there are many plants immaculately taken care of. If you are a frequent driver you would notice that it is actually a homeless man who does our city this lovely deed. I stopped by on my bike today to talk to him.

He was very kind, a little blunt. He told me of his 12 hour workdays and cold nights. He has been doing this work for three years now. While PG&E does supply free water and the city does allow him to use their topsoil from time to time, he does not receive money for food or equipment and plants. Yes, it would be ludicrous to demand a minimum-wage for this man, but I do not see why we couldn't gather up some spare change and help the man out. He did mention he receives social security but that isn't much.

He mentioned to me that he is in dire need of the following: 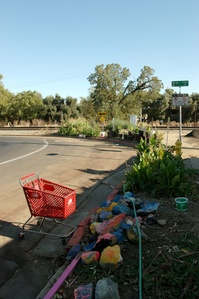 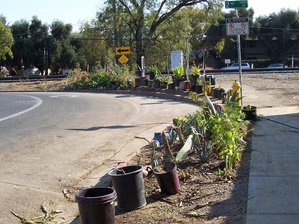 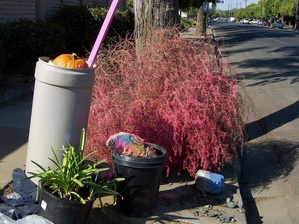 Yes, that is a painted tumbleweed as a bush.

Art is always a fickle thing. This appears to be a Halloween inspired installation. 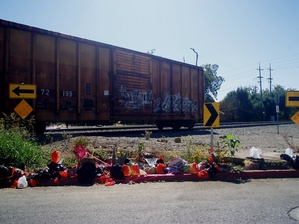 The above Halloween display in context.

2004-12-01 23:12:45   I was all ready to offer the guy something, but then read the out-drinking him part and was a bit annoyed. Most people don't drink that much and I sure as hell won't be able to out-drink him. I know the last part was probably well meant, but it really annoys me. —MarieHuynh

2004-12-02 13:46:33   I used to live near there it sprouted up in the year 2002 when I got to Davis it didn't used to be there. Also the neighbor kids kicked the garden down initially. I know about plants and the reason that most of his plants die seasonally is that he plants annuals(they die after their season is done) someone needs to get him some bulbs or shurbs to keep some permanence instead of dead flowers ever 6 months when it gets hot or cold. —RyanBasilio

2005-02-07 17:43:19   The Empty Prize did a piece on this little corner of our world today... Davis' favorite gardener is named George Swazo Empty Prize article —AlphaDog

That was an excellent article about George. :) —JackHaskel

2005-10-21 15:23:17   I talked with him today after seeing this page, and he was about to attempt making a scarecrow for Halloween. When asked, I told him how I heard about his garden. He said someone had mentioned seeing his garden on the internet, but he never believed it. He was shocked and appreciated that people would take pictures of his work because they liked it. PS: His new additions are several cacti from cuttings he took. Cacti can be very dangerous for someone with his vision problems, but he thought they would look nice. —AllisonEriksen

2006-11-08 17:14:06   He put up a campaign sign once, bob dunning noticed this and there was an upproar becuase it is city property and the city can't endorse / take positions. The sign was removed promptly —StevenDaubert

Alas if I recall, the garden seems to be not much at all... These days... —StevenDaubert

2010-02-17 03:18:27   He's apparently moved to the section near Target, though apparently some (insert unflattering string of expletives here) woman came by and stole all of his buckets, despite being told by someone that they were George's. —Flynn

2010-07-03 11:05:52   Friend of a friend says that George is probably legally blind—if somebody walked off with his buckets, he'd never find the things again. —Angel.York