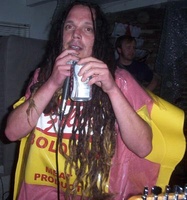 Mick rocking out at the Pirate Ship, Halloween, 2004 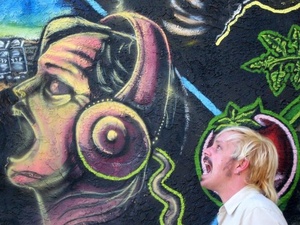 He has hosted a show The Chicken Years" on KDVS  since 1995. He is on Tuesdays at nine pm.

Mick is also a Woodstock's Pizza delivery man. It is always recommended that you tip him well because he has many friends in this town with brass knuckles and criminal backgrounds.

Mick was also a co-founder of Davis Food Not Bombs.

Mick's profile is within the mural on the Davis Media Access Building on 5th street.

He lived at the Charred Dog House. fo r 15 years until it was gentrified by the Owner.