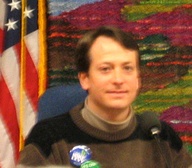 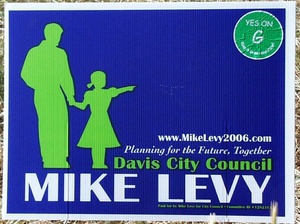 Mike Levy ran for City Council in the Spring Election of 2006. He lost. (See the Davis Enterprise article, or the Cal Aggie article.) He was the chairman of the Governance Task Force that recommended choice voting to the council.

Mike was a UC Davis student from 1984-1988, and played cymbals and sousaphone for the Cal Aggie Band-uh!. Mike has stayed involved with the University and is currently on the Board of Directors for the Cal Aggie Alumni Association, where he chairs the Development Committee. As part of his chair duties, he is leading a campaign to raise $5 million for the Alumni Scholarship Fund. As an alumnus of the Band-Uh!, Mike continued his service as President of the Cal Aggie Marching Band Association from 1993-1995. After his term as president, he continued to give back by creating an Endowment Fund for the Band-Uh! in 2000 and raising $550,000 for the fund.

He is a Senior Staff Attorney with the California State Water Resources Control Board, a volunteer mediator with the First District Court of Appeal, and a Davis resident. Mike's eldest daughter, Sarah, is 2 1/2 years old. His second daughter, Rachel, was just born in March. Compared with keeping the boys away from Sarah, Mike thinks that running for City Council is a breeze.

Mike also has both a facebook profile and group ("Mike Levy for City Council in 2006!") that he is pretty excited about.

If you are happy with the current City Council, this would be the guy to vote for. — SharlaDaly

2006-03-29 18:02:10   Mike would be a voice for *carefully* planned growth on the Council, and someone who will listen to his constituents and reach out to the student community. I want to see him on the Council. —PaulZinn

2006-03-30 15:37:58   I talked with Mike last night, especially regarding ACTUAL affordable housing in Davis and smart, green minded planning. Although I still have more research to do, I really felt he would be a good person the Council. I encourage people to seek him out and chat. —JanelleAlvstadMattson

2006-04-03 07:49:37   Mark Champagne sent out an email to all ASUCD officials telling them they cannot use their titles when endorsing candidates. If you look at Levy's site, Darnell Holloway has his title being used on the endorsement list. Hope he knows because that is a lawsuit waiting to happen, as Mark warned.

Hmm...Avi Singh has his title too. Perhaps this is because the Levy campaign is out of touch with all that has transpired in the last few years regarding ASUCD government and endorsement of candidates. I don't believe that the students would knowingly break the rules regarding this. The Campaign is responsible for their website and risk and in putting the student's positions at risk. —SharlaDaly

Actually, the students' positions are not at risk here. Both Lamar Heystek's and Mike Levy's endorsement pages include the disclaimer "Titles are used for identification purposes only," with Levy going even further to add "and do not imply support in any official capacity." That should satisfy ASUCD's interest in not appearing to endorse anyone.

So you are saying that someone like Judge David Rosenberg could place his name on an endorsement list with his title, "Superior Court Judge" and because of a disclaimer somewhere on the page that the title is for identification purposes only, it would be OK? I think that it could pass legally, but it shows a lack of sensitivity to past concerns about ASUCD breaking laws by endorsing candidates. —SharlaDaly

No, a judge cannot endorse a candidate in a personal capacity either, so Judge Rosenberg couldn't do that and the analogy fails. —KrisFricke

2006-05-23 16:56:44   Last Wednesday I had a chance to talk to Mike Levy for about an hour. We don't agree on everything, but I think he's definitely a professional and respectful candidate who puts a lot of thought into his ideas. I'm always apprhensive of candidates that can declare that they are pro or con something but can't talk in length about why they formed such an opinion. Not so with Mr. Levy, he and Lamar both seem like great candidates so far. —AlvinTsao