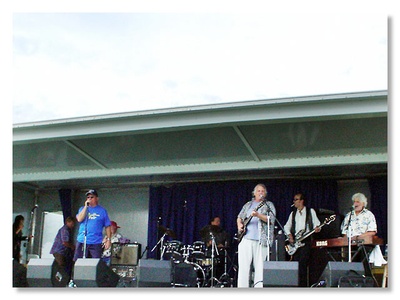 Supervisor and former West Sacramento mayor Mike McGowan gets his blues on with old friend Barry, 'The Fish' Melton, Banana, and other Woodstock-era bluesmen.

Mike McGowan was originally elected to the Yolo County Board of Supervisors in November 1992 and was re-elected in 1996, 2000, 2004, 2008, and 2012. Among other duties, he represents the Board of Supervisors at the Yolo County Transit Authority, the Local Mental Health Board, the Yolo Basin Working Group, the Library Advisory Board, the Sacramento Area Trade & Commerce Advisory Board, the Port of Sacramento, the Delta Protection Commission, the Bay-Estuary Project, and the Yolo-Solano Air Quality Management Board.

In his youth, Mike McGowan served as a Marine Corporal in the Vietnam War. On the verge of flunking out of Sacramento City College and fearful of being drafted into the Army, McGowan opted to join the Marine Corps and was sent to Vietnam in February 1968 to serve in a field artillery unit when he was just 20 years old. McGowan returned home little more than a year later and just four months later married his girlfriend, Sue, who stayed with him through his military experience. Now stateside, McGowan got serious about college, attended McGeorge Law School and practiced as a criminal defense attorney before going into politics.

In December 2013, Mr. McGowan started a new position as deputy director of strategic planning and policy at the California Department of Motor Vehicles. This is an appointed position that does not require state senate approval.

RogerClark lives in one of his former residences.