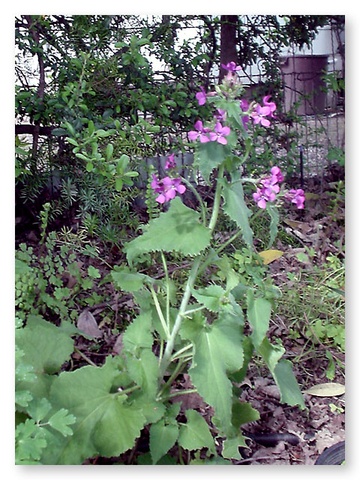 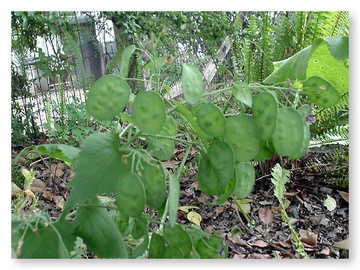 By early summer, the money plant drops its blossoms leaving coin-shaped seedpods for which it is named.

Money Plant (Lunaria sp.) are a genus of hardy biennials/perennials from the Brassicaceae (previously Cruciferae) family which includes mustard, cabbages and cresses; this genus is native to southeast Europe and western Asia and includes just a biennial and annual species. They are grown for their pretty flowers and round, translucent, silvery seedpods called silicles; it's also a vital nectar plant popular with butterflies. Also called Honesty, Moonwort, Satin Flower and Silver Dollars, the name lunaria is derived from luna, the moon, and refers to the shape of the seedpods. Lunaria rediviva, a perennial, will grow to 24"-30" with finely serrated oval-lance-shaped leaves sometimes tinged with maroon  its small, fragrant flowers have four petals and are borne in branching clusters on long, sturdy stalks in the spring; they may be purple, lilac or white. After blooms are spent, flat green pods develop inside which are the seeds. Over the summer months the pods and stalks will dry and turn a golden brown color while the pods become silvery and paperlike.

Lunaria will thrive in poor soil, but fertile, moist soil that has good drainage is the best. Place them in a sunny or partially shaded position  they should have at least four to six hours of sun. In early fall, the stems bearing the seeds should be cut and hung upside down in a cool, airy room for a week or two to dry completely. Perennial lunaria may be divided in the spring, or seeds of either species may be sown outdoors in the spring or fall — they germinate easily and will grow large green leaves in the first year and bloom the following year. After blooming, lunaria will drop seeds and regenerate year after year; for this reason it is considered invasive in especially fertile areas.

For a list of other plants found growing in Davis, please visit out Town Flora.